Sister Bay’s waterfront expansion has received more fanfare, but Egg Harbor’s less costly waterfront effort is earning praise and popularity thanks to a beach enhancement project that more than doubled the expanse of the public beach.

“When we came here yesterday we were shocked,” said Pat Morzy of her family’s first look at the reconstructed beach July 12. “This is fantastic,” said her husband Walt. “This beach combined with the new marina is going to be a great thing for Egg Harbor.”

Egg Harbor expanded its beach this year, and its more than 400-foot sand beach is attracting people in droves.

The couple first visited Door County 38 years ago, when it was tough to find a motel that accepted credit cards. Through most of those years they frequented Nicolet Beach in Peninsula State Park, but they said they may have a new favorite.

“I hope it stays kind of a secret,” Pat said from beneath a beach umbrella that provided shade from a beaming Tuesday sun. That’s not likely.

The beach used to be just a short nook of sand inside the small Alpine Resort pier. In high water years there was only a narrow strip of sand (but deeper water to jump into off the end of the pier). But in 2007 the village paid $1.6 million for the Troup property to the east of the beach, adding 150 feet of beach. However, that section of shoreline was separated from the rest by a large rock jetty and other rubble. For about $70,000, the village was able to create an entirely new look at the beach and park.

“What we did is maximize what was there,” said Village Administrator Josh Van Lieshout.

The jetty was removed, adding about 40 feet of uninterrupted sand shoreline, which has an even greater visual effect when combined with the Troup property shorefront. An old rock wall that continued from the Alpine beach was also removed.

Boats tie up outside the swimming area at the Egg harbor beach.

The beach project began last September, with more important goals than simply adding room for people to bask in the sun.

The beach lies at the foot of a bluff, so when it rains, water used to slide down the steep slope and directly into the bay, carrying bacteria with it. Last year the beach was closed four times because of elevated E. coli readings. In its project, the village installed a biofilter of plants, sand, and natural materials to filter the storm water before it gets to the beach. A $25,000 grant from the Wisconsin Coastal Management Program offset costs.

But it’s the expanse of sand and enhanced amenities that have attracted previously unseen hoards of people to the beach and park. The park has changing rooms, a picnic pavilion, wooden boardwalks to the beach, and chairs made with wood recycled from the trees cleared for the walking path the village constructed between the beach and downtown.

Emily Bertschinger said the popularity of the beach has been growing for several years. “Now it seems to be growing into the beach to be at,” she said. “People love it.”

Bertschinger’s family owns the neighboring Alpine Resort, which actually owns part of the beach – the reason many locals refer to it as Alpine Beach. For as long as anyone can remember, the Alpine Beach and pier have essentially been considered part of the public beach.

Bertschinger loves the new attraction, but she is concerned about parking and safety. On visits to the beach the first two weekends in July, cars were lined each side of Beach Road all the way down to the Alpine Resort. The narrow road was squeezed to the point that it wasn’t wide enough for two cars to pass at times. 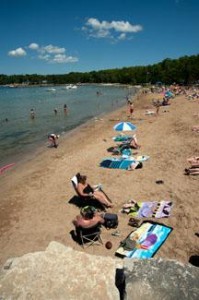 Van Lieshout said the village will add more parking this fall, and said the cooperation of neighbors has been crucial to the project. A permeable parking lot surface will be installed on the east side of the beach in conjunction with upgrades to existing parking, paid for in part by a $274,000 Great Lakes Restoration Initiative grant.

The village reached an agreement to provide kayak rentals at the beach next year, and plans to launch a sailing school are in the works.

With the beach swamped with people and teaming with boats this July, the expansion seems an obvious success. But when the village debated the purchase of the Troup property in 2006 and 2007, there were many doubts.

“Everybody had stomachs turning over that one,” Van Lieshout said. But the village board has not shied away from making bold, possibly-risky decisions the last few years. “This board is probably the most pro-active I’ve worked with as far as promoting and enhancing its community.”

He listed several examples, including the reconstruction of the public marina, support for the business association and the Peg Egan Performing Arts Center, completion of a comprehensive bike plan, and improvements to trails and Harborview Park.

“We don’t have a state park in Egg Harbor like Fish Creek does with Peninsula, so it’s a big deal to do this,” he said. “The easy thing to do is stick to the routine jobs, maintain roads and budgets. It can be very difficult to step outside of that safe zone. It was definitely bold. But the board did it, and it is definitely paying off.”