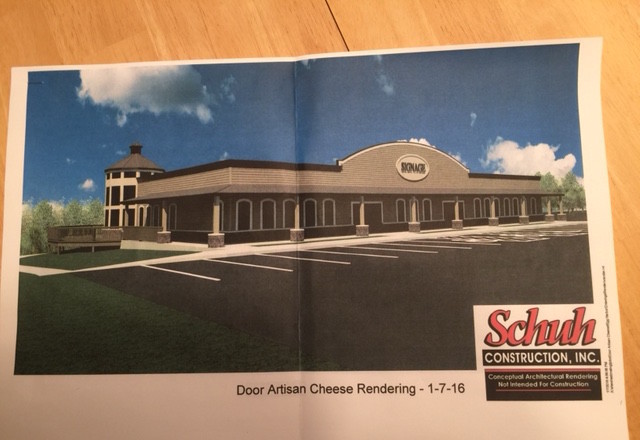 Egg Harbor residents who oppose plans for an artisan cheese factory/retail store and restaurant across from Wood Orchard Market on Hwy. 42 have brought Not In My Backyard to a whole new level, according to developer and master cheesemaker Mike Brennenstuhl, who said he has received both telephone and email threats from people who said they would do whatever it takes to stop him from opening his dream cheese plant.

At the Feb. 15 meeting of the Egg Harbor Town Board, Brennenstuhl said threats came from people who were in the packed town hall, and those threats have been “from litigation to whatever it takes,” he said.

“I didn’t expect it to be this way,” Brennenstuhl said. “I tried to be professional. I want to do something good for all of Door County. To act that way is unacceptable.”

Brennenstuhl also addressed some of the concerns residents have brought up, including the possibility of ground contamination from the former orchard that used to occupy the property. Residents are concerned that blasting of bedrock on the site will release contaminants. Brennenstuhl said extensive core borings will be taken of the entire area.

“If it is a problem, the project would be dead. We do not want to disrupt anything that’s there,” he said.

He also agreed to install sound-dampening berms on the property to alleviate noise concerns of neighbors in the Cherry Bluff Estates.

For residents who have expressed concerns about the increased traffic and what that will mean for the 55 mph stretch of Hwy. 42 the planned project abuts, Brennenstuhl said he had met with Wisconsin Department of Transportation (DOT) representatives that morning. He said they are not interested in reducing the speed limit on that stretch of highway, as some residents have suggested.

“If we get the project approved, probably some state DOT people will re-evalute that area,” Brennenstuhl said, adding that they might consider installing turnout lanes, and if so, he would be responsible for providing the land for those lanes.

“All I ask is that the board be fair,” Brennenstuhl said in summation. “Deal with the facts, don’t deal with emotions and just do the right thing.”

As explained by town attorney Randy Nesbitt, there was very little the town could do with Brennenstuhl’s proposal because some of the issues such as the speed limit on Hwy. 42 and environmental contamination are not within the scope of town authority, and as long as Brennenstuhl’s proposal meets other town standards, the board would have to grant his request for a permit.

“What it boils down to, you have very limited authority here,” Nesbitt said, adding, “If you don’t issue a permit, you are in a position to be sued by the developer.”

Town Supervisor Myles Dannhausen referred to requests from residents who felt the town board should delay a decision, partly because some felt the decision was being made too quickly and because many residents are not here in February. He suggested the town had no authority to delay the project because that would be a cost to somebody.

“I don’t know where delaying is going to provide any additional information to make that decision,” Nesbitt said.

Supervisor Dale Wiegand moved to grant a permit to Brennenstuhl for his planned Door Artisan Cheese, with the provision that he add to his plans a landscaping mound on the south side of the property.

Dannhausen seconded, and the permit was approved, however, Dannhausen added that it should go on the record that the town had little choice but to grant approval.

Supervisor Steve Schopf said he read a lot of comments from people and talked to a lot of people who are opposed to the project.

“I hear where they’re coming from and I feel the dilemma,” he said. “I feel like our hands are pretty much tied.”