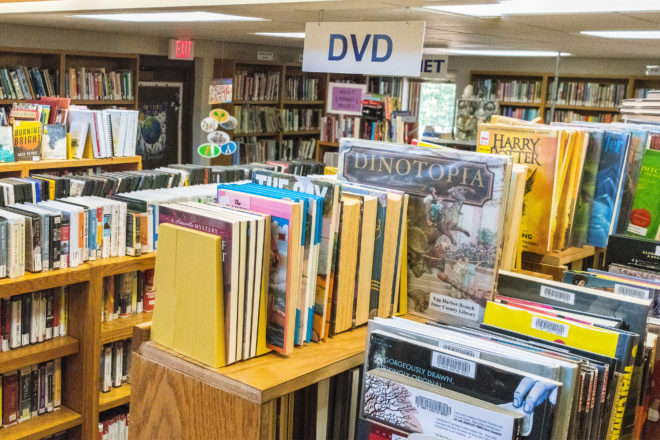 The inside of the current Egg Harbor Library. This collection will soon find its way to the new library and community center. Photo by Len Villano.

Egg Harbor’s library is moving on. For the past 32 years, the Paul J. Bertschinger Community Center has been home to its media collection, serving patrons year round. By January 1, 2018, the Donald and Carol Kress Pavilion and Egg Harbor Library will handle that foot traffic, in addition to vastly expanded programming and community space. The move inspires a look back to remember the Bertschinger Center, as well as what came before it.

One-hundred-and-thirty-four years ago, the first community space based around the study of information was built: a one-room log cabin, Sunny Point School, would serve the village its first school lessons. Seventy years later, with World War II veterans trying to settle into life after the war, a service called the Bookmobile came to Door County with people coming out in droves every week to get their hands on new books. Almost 20 years later, in 1969, the Egg Harbor Women’s Club successfully lobbied the village to erect the village’s first library, with start-up funds raised by the women’s club as well as the Egg Harbor Lions Club. The library stood in what were the Granary Shops and is now designworks.

The library remained there until 1985, when the Paul J. Bertschinger Community Center was constructed to meet the demand for more community space, again funded by donations, most notably $75,000 from the Bertschinger family in the memory of their father, Paul, who founded the Alpine Resort with his brother John in 1921.

Today, the Bertschinger Community Center is home to the village offices, post office, library and community meeting space. For all the hats the building wears, the place is a little cramped.

And yet, that small space has served the Egg Harbor community well. Holly Cole, Egg Harbor’s librarian of 12 years, couldn’t speak more highly of the little space on the hill. 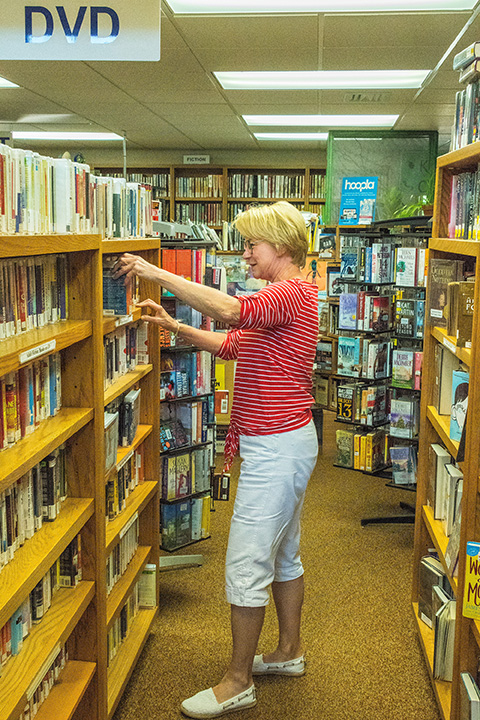 Librarian Peggy Nelson tends to the collection at the Egg Harbor Library. Photo by Len Villano.

“It’s small but mighty,” she said. “We’ve done a lot with this little space…we’ve always made it work.” The library has successfully hosted hundreds of programs and activities for children and adults, often filling up the space (which, admittedly, doesn’t take many bodies to do).

Cole cites the close quarters of the library as essential to the experience her patrons have come to expect.

“Because we are so little, we are able to have a personal touch…everybody is special.”

The small space brings people together. In such a small place, there is little room for anonymity. Cole’s position has allowed her, a transplant, to integrate into the Egg Harbor community.

Though Egg Harbor’s library and community space has done an admirable job with its space, the evolution of library services is forcing a change.

“Libraries were the home of information,” Cole said. “And that’s our primary purpose now…[but] the whole definition of a library [has had] to change. Suddenly, you can’t be quiet anymore. There are too many questions that have to be asked.”

The village’s plan to build a 15,000-square-foot library and community center ruffled a few feathers. It’s a big change, but if the evolution of the library can show us anything, it’s that today’s libraries have to dream big and do more than they’ve ever done before.

Egg Harbor Village Administrator Ryan Heise said the size of the building was determined by the types of services that were in demand that the current space couldn’t fulfill.

“We wanted it so that we could have seating capacity for [many types of larger events],” he said. “We started looking at what size that space would need to be in order to host these types of events…and we landed at the size that it’s going to be.”

That larger space may change the dynamic of how Cole interacts with her patrons, but she plans to try her best to retain that feeling of a small-town library, where people meet and look for answers and come together as a family. Even if the way we consume media has changed, the Egg Harbor community’s demand for it has remained stayed strong.