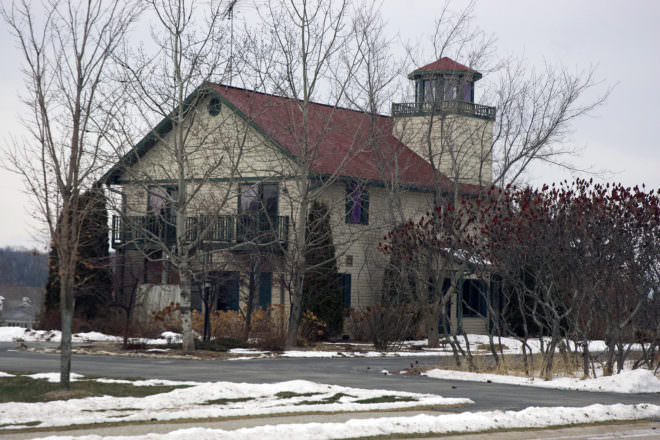 The village had originally announced it would sell the Lighthouse Inn building in order that it be removed to another location so work can begin late next month on the new village library and community center. If a buyer could not be found for the inn, the village would have had to demolish the building it at a cost estimated at $20,000.

Navis, owner of Greens N Grains in the village, was the only person to show interest in the inn. In the meantime, she had been talking with the owner of the Wildflower B&B at 7821 Church St. The plan was to buy the Wildflower and move the Lighthouse Inn to the property, and between the two buildings, have eight living units that would have been a mixture of year-round residence, transient rooms and seasonal worker housing.

But someone apparently made a better offer to the owner of the Wildflower, and that option was no longer available. However, not anticipating that the Wildflower owner would back out of the deal, Navis had begun preparing the Lighthouse Inn for the move, including working with contractors to make the move. But now she had nowhere to move the building.

She regrouped and quickly found another location for the inn. But at the same time, another Egg Harbor business owner said she heard on the radio that the deal with the village had fallen through. Erin Bosman of Patricia Shoppe was prepared to give the village $2,000 for the inn. She wanted to replace a 400-square foot rental cottage she has on her property with the inn.

“I have already spent thousands of dollars on legal fees, gutted the downstairs, and have weeks of labor already in working on the building,” Navis told the trustees.

Navis explained to the board that she has signed an offer to purchase a half-acre of land owned by Egg Harbor businesswoman Christine Tierney behind the Lull-Abi Inn at 7928 Hwy. 42 in the village.

Village Administrator Ryan Heise read from a letter from the village attorney saying the village board could either accept the revised terms Navis provided or her proposal could be rejected and the village could put out another request for proposals asking people to bid on the Lighthouse Inn. But he also pointed out that it needs to be moved by Feb. 15 or thereabouts so work can begin on the library.

Village President Joe Smith pointed out that Navis was the only one to respond in the specified amount of time, and that it was only due to circumstances beyond her control that the original deal fell through. He also pointed out that she recovered quickly from the setback.

“My bid was the only bid that came out in the time frame,” Navis said. “This bid [from Bosman] is three months late. I’ve been working on this for months and months.”

“We’d all like to give you this property,” said Trustee John Heller.

Navis pointed out that she has contractors and movers ready to go to work, and by opening the project for bid again, the village would never get the building off the property by Feb. 15.

Navis said the contractors are just awaiting her phone call. She added that if $2,000 is the issue, she would revise her bid and give the village $2,000, to which Heller suggested if they open it back up for bid, they may get an offer of more than $2,000.

Smith moved that the village stick to the original deal of selling the building to Navis for $1. “Based on her statements, I’m confident she’ll be able to succeed in having it moved in this time frame.”

Dickson seconded the motion and all but Trustee Paula Cashin voted in favor of selling the building to Navis for $1.