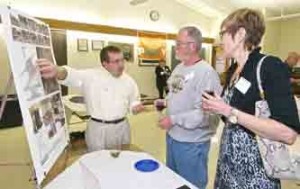 Egg Harbor Village Administrator Josh Van Lieshout, left, explains improvements to be made in the community during a meeting. On Sept. 1, Van Lieshout will become the new administrator for the City of Sturgeon Bay.

Josh Van Lieshout recalled that one of the interview questions he was asked when applying for the position of administrator of the City of Sturgeon Bay was what does he hope people remember about him in 20 years.

“Frankly, I hope they don’t remember me at all,” Van Lieshout said. “But when I’m here, I want them to remember me as a good person, a reliable person and a good guy to work with.”

On July 2 Van Lieshout was chosen to replace Steve McNeil, who is retiring as city administrator on Aug. 1.

Nineteen people had applied for the position, which was posted in May after the announcement that McNeil planned to retire. The city whittled the 19 down to four applicants, who were invited for interviews in late June.

After the announcement, Mayor Thad Birmingham and council members said all of the finalists were very good candidates, but Van Lieshout’s knowledge of the county and overall governmental savvy placed him above the others.

“We had four candidates that we looked at and talked about, and he came out on top,” Birmingham said after the decision was announced during a special meeting of the Common Council on July 2. “I think the fact that he is from town, has volunteered for local organizations. He’s on a city committee. Those were some of the things that helped me make a decision. He’s familiar with Act 10 and Act 32. That’s huge. He has experience with other municipalities in an administrator role, which was important. Josh was a better fit with the Wisconsin roots, Door County roots, Sturgeon Bay roots. It was a tough decision. Any time you’re looking at this level, basically everybody we’re looking at is pretty good. It really gets difficult.”

Van Lieshout said the days between his interview and the city’s announcement of his hiring were pretty stressful for himself and his wife Teri. They have two daughters, Arry and June.

“We live here in Sturgeon Bay and it’s something I’ve wanted to be a part of for a long, long time,” he said. “The other guys had advanced degrees, but I have a lot of experience and a lot of it right here in Door County. My body of work is pretty close by.”

And that body of work is very evident in the Village of Egg Harbor, where Van Lieshout has been administrator since 2007.

“It is with sadness that I face Josh Van Lieshout leaving the Village of Egg Harbor, however I am more than happy to see him advance his career by moving to a more challenging role in a larger community,” said Village President Joe Smith. “Josh leaves the village in great shape, tangibly and intangibly. The staff he has assembled and mentored during his tenure with the village are more than capable to handle the day-to-day operations of the village in his absence. Furthermore, the village staff is capable of spearheading and leading new endeavors, including the upcoming updates to our Hwy. 42 downtown corridor. The record of achievements by the village while Van Lieshout was administrator is not to go unnoticed. Major renovations to the public beach, municipal marina, and village parks were executed skillfully and tastefully. The declaration of Egg Harbor as a Tree City, Bird City, and Eco-Municipality among other awards is testament to his leadership and foresight.

“Moving forward, I expect the Village Board to hire a consulting firm to lead the hunt for a candidate to fill the administrator position,” Smith continued. “A provision in Van Lieshout’s current employment contract requires him to provide the village with a 60-day notice to terminate his employment. With that extra time I hope that the new administrator will get some on-the-job time with Van Lieshout to ease the transition.”

“My attitude, the next time I’ll do better,” Van Lieshout said. “There’s an opportunity with everything, and that’s certainly true of the Village of Egg Harbor. They’ve got a lot of opportunities ahead of them. And I’m not going anywhere. I’m just down the street.”