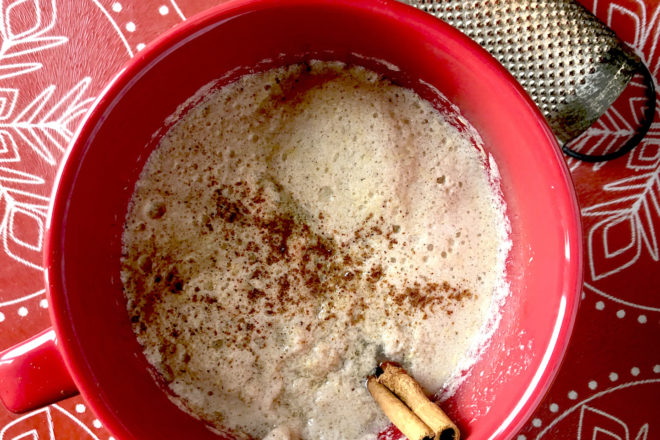 When you live in the wintery Midwest — and particularly in Wisconsin, America’s Dairyland — it’s no surprise that there’s a common cold-weather cocktail that features brandy, milk and butter as its core ingredients. And although it serves our dairy heritage well, the drink’s origins actually stem from a British journalist, Pierce Egan, who added booze to his eggnog during the 1820s and named it a Tom and Jerry after a book and subsequent play he authored.

Famed bartender Jerry Thomas of Planter’s House Hotel in St. Louis further popularized the drink. Thomas — also known as the Father of American Mixology — helped it to gain traction by serving it during Christmastide and claiming often that the drink recipe was his own invention.

Unfortunately for Thomas’ claim, evidence of the recipe had been recorded in the United States prior to his birth. Still, he succeeded in sharing Tom and Jerrys with the masses, and the drink eventually became available in many bars and saloons as the snow began to fall.

By the mid-20th century, you could even find Tom and Jerry mug-and-bowl serving sets emblazoned with the drink’s name. During recent decades, it hasn’t enjoyed as much popularity, but it seems that things might be swinging back in its favor. The shift toward all things cozy beginning in the fall and the recent embrace of the hygge concept in American culture seem to have revived interest in this vintage recipe — especially during the winter holiday season, when cravings for nostalgia are so prevalent.

Make a batch before your (immediate) family gathering to find a little solace from the bitter cold in a mug of this buttery, milky, boozy beverage.

Preheat the mug you’ll use for serving. Then add 1 heaping tablespoon of batter, the rum and the brandy. Fill the mug with hot milk or water, stirring constantly until the drink is foamy. Garnish with grated nutmeg. Serve and enjoy!

Separate the egg whites from the egg yolks, and place them in separate bowls. Add the cream of tartar to the egg whites, and whip them with a stand or hand mixer until stiff peaks form.

Add the softened butter and sugar to the egg yolks, and whip them until they’re fully incorporated and liquid.

Gently fold the egg-yolk mixture into the egg whites.

Stir in the cinnamon, cloves, nutmeg, vanilla and rum.

Cover and store the batter in the refrigerator until it’s time to make the drinks. Separation is natural; just stir before use.