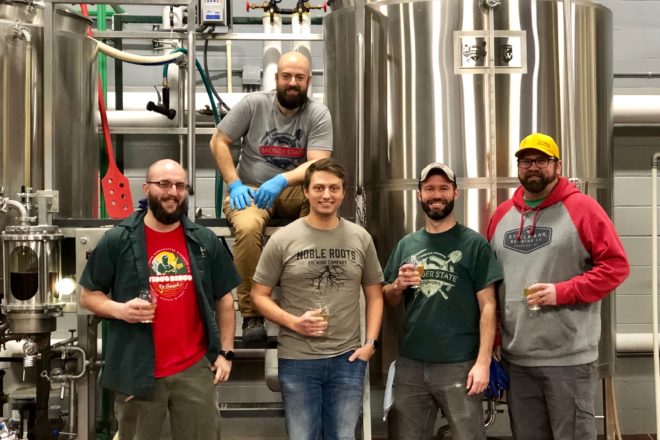 Eight breweries in northeastern Wisconsin banded together to brew an IPA to help California wildfire victims.

The idea came from Sierra Nevada Brewing Co. of Chico, California, which is in the heart of the area burned by the devastating Camp Fire. The brewery created the Camp Fire Relief Fund and came up with a West Coast IPA recipe it calls Resilience. Sierra Nevada sent the recipe to breweries across the country in the hope that others would join the effort to raise funds for those who lost homes in the fire.

Brad Stillmank of Stillmank Brewing in Green Bay was the area contact for Sierra Nevada.

Stillmank loved the idea, but he knew his brewery and taproom would not be able to sell enough to make a real difference.

“So I put a phone call out to other breweries,” he said. “Everybody was, ‘Absolutely, we’ve got to do this.’ Everyone agreed that 100 percent of the proceeds would go to the fund Sierra Nevada set up to help some of the victims.”

“All of us were there to brew it. All of us are making donations, and all of us will have it on tap,” Stillmank said. “In fact, the kegs are being filled as we speak.”

Stillmank said this is not the first time the Green Bay breweries have collectively brewed.

“We get together to brew a beer in the spring for Beer Day in Green Bay,” he said, “but it is the first time for us to do something on a fundraising effort where we’re all supporting one cause in making beer, so it was pretty neat in that way.”

In addition to all the brewers showing up at Badger State for the brew day in early December, Stillmank said members of the Green Bay Fire Department also showed up to participate and show support.

“When they put the program together, they offered one recipe they were putting out to all the breweries across the country,” he said. “There are going to be lots and lots of iterations of this one recipe. It will be fun to see how different they are, depending on the brewery, the water used, and techniques. I know Sierra Nevada made a batch they are shipping nationwide that should be available in the next week or two. It will be fun to compare theirs with ours.”

Stillmank said he has not yet tried the beer produced by his group, “but the guys at Badger State keep giving us a big thumbs up.”

He added that the project also had the support of brewery suppliers.

“We were able to get a lot of the suppliers to donate materials to make this beer. The malted barley came from Briess in Chilton, donated 100 percent. The hops from Yakima Chief Hops Union were donated 100 percent. The yeast was donated from Yeast Labs of Chicago. This was more than just the breweries involved in making this happen, so as much money as possible can funnel back to Chico.”

“That’s a lot of pints,” Stillmank said. “If we can get people interested and have a pint or two, all that money goes back to people in need right now.”