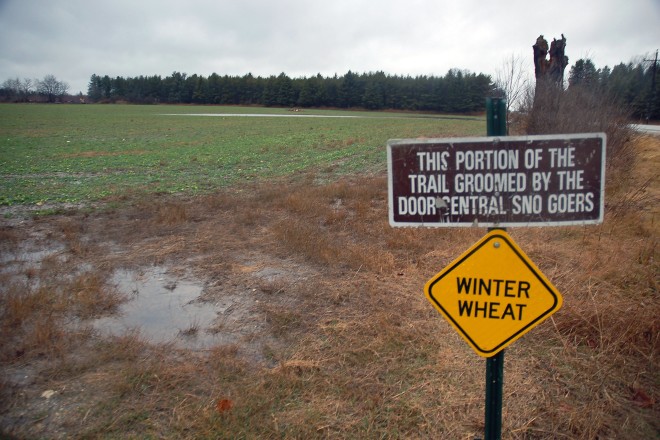 If you are still dreaming of a white Christmas, Assistant State Climatologist Ed Hodges says statistically there is almost a 60 percent chance of that happening, but don’t hold your breath.

“In the last 30 years of climatology in Door County, there’s been one inch of snow on the ground 60 percent of the time at 6 am Christmas morning,” Hodges said, explaining the statistics of it.

However, weird weather anomalies, including El Niño, cancel out statistics this year.

“There’s pretty good odds that it’s going to be above average temperatures,” Hodges said. In fact, rain is forecast two days before Christmas Day and the day after.

Hodges said El Niño is a definite factor in the unusual weather Wisconsin and other parts of the country have been experiencing, but putting all the blame on that cyclical weather phenomenon is oversimplifying what is going on.

“There are things we see that are El Niño driven and some of it is not,” he said. 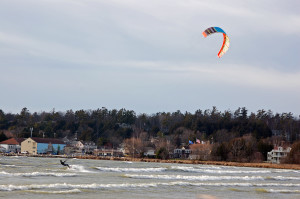 Kitesurfers still take to the water in Baileys Harbor on Dec. 10. Photo by Jim Lundstrom.

Another El Niño indicator is more hurricanes than normal in the eastern Pacific.

“Well, this year in both eastern and central Pacific, around Hawaii, it was one of the most active hurricane seasons on record, so, yes, the El Niño was an effect,” Hodges said. “What makes it a little more complicated is that the eastern Pacific Ocean extending all the way up into Alaska has been abnormally warm. That isn’t just purely an El Niño signal.”

In fact, Hodges said, record sea surface temperatures have been recorded around the globe.

“How that all relates, you’ve got to be somewhat careful in how you sort it out,” Hodges said. “It’s not all coming from the El Niño event.”

However, a climatologist with NASA’s Jet Propulsion Laboratory dubbed this year’s weather event “the Godzilla El Niño.” He went on to say that this year’s El Niño is “stronger than it was in 1997,” the year of the most powerful El Niño on record.

It sounds as though The Old Farmer’s Almanac folks did not get the weird weather memo, for their annual weather forecast predicted cold and snow that has yet to appear. “Winter will be much colder than normal, on average, with above-normal precipitation. Snowfall will be near normal in most of the region but above normal in the east. Very cold weather will predominate from late December through early February, with the snowiest periods in late November, late January and mid-March.” 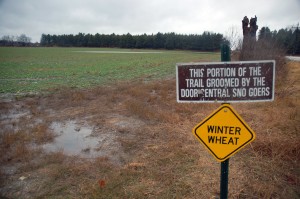 All of which is just fine for Door County Highway Commissioner John Kolodziej, whose department went over budget for road treatment and plowing to the tune of $400,000 the past couple of brutal winters.

“We are usually plowing or applying products by now,” he said. “We did have one event a couple weeks ago when we had to send out some crews to put down some salt, but that’s it. It’s pretty amazing. The budgets look very good at this point.”

Lower heating expenditures are expected across the U.S. through March, compared to the last two years, thanks to the combination of warmer weather and lower fuel prices, the U.S. Energy Information Administration noted in a recent report. The agency expects heating fuels consumption to drop 10.5 percent, prices to drop 8.9 percent and expenditures to decline 18.5 percent.

Sandy Duckett, CEO of We Are Hope, said the warmer temperatures so far have not had an effect on the number of applicants for heating assistance, which is typically 1,200 to 1,300 Door County households.

“But it has meant staff who are on 24/7 to respond to furnace emergencies have not been responding to late night and weekend calls,” she said.

What Is El Niño?

El Niño is the occasional warming of the equatorial Pacific Ocean off the west coast of South America, resulting in changes to wind and ocean currents that modify global weather conditions such as warmer winter over the western and northern United States and Canada, more rain for parts of North, Central and South America, and less rain for parts of Africa, Asia, Indonesia and Australia. The name refers to the Christ Child because El Niño’s effects are most apparent near Christmas. Scientists remain puzzled about how this cyclical event occurs. Up until now, the El Niño of 1997 is considered the granddaddy of them all, a forecaster with NOAA’s Climate Prediction Center said, “We cannot find a single El Niño event that tracked like another El Niño event,” meaning that each one is the result of conditions and climate peculiar to that place and time.