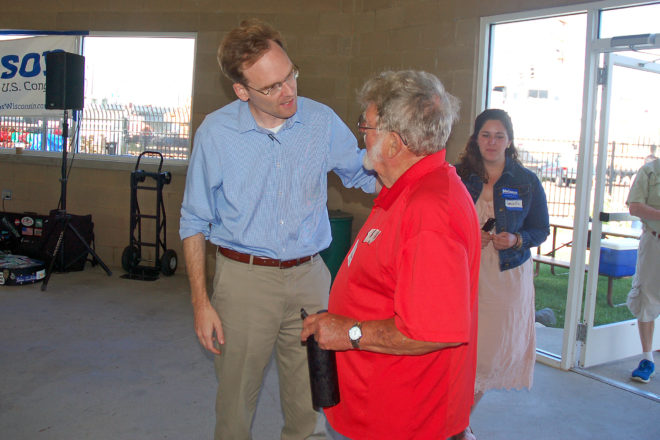 Nelson, who served three terms in the Wisconsin Assembly representing the 5th Assembly District (2005-2011), which included being elected Assembly Majority Leader in 2008, has served as executive of Outagamie County since 2011. Now he has set his sights on serving in Congress, representing the 8th District seat held by the retiring Reid Ribble.

Nelson was in Sturgeon Bay on July 14 as the guest of the Democratic Party of Door County at their annual summer picnic at Sawyer Park.

In a meeting with reporters upon his arrival at the picnic, the youthful 40-year-old Nelson said jobs and the economy continue to be big issues for 8th District constituents. Nelson believes trade will be one of the big issues facing the 115th United States Congress.

“This is not a new issue. It’s an issue that concerns a lot of the workers, especially those in manufacturing. And it’s an issue that I have worked on for many years,” Nelson said, adding that he opposes the proposed Trans-Pacific Partnership (TPP) “and other unfair trade deals and practices.”

“It’s a bad deal for American workers, and especially Wisconsin workers,” Nelson said of TPP. “For a district where manufacturing is such a huge presence, it’s particularly harmful. You can go back to 23 years ago to NAFTA (North American Free Trade Agreement) to learn some really hard lessons. That was a really bad deal. These sorts of trade deals are bad news for workers. This [TPP] has been hanging out there for a while. I think we need to oppose it. I think we need to stop it.”

Noting that opposition to TPP goes against President Obama’s wishes, Nelson said he would always uphold people above party and politics and does not feel it is necessary to goose step in time to party leadership.

Nelson also touted his ability to deliver budgets on time.

“One of the main responsibilities of Congress is to adopt a budget,” he said. “Congress has not adopted a budget in 22 years, since 1994, the year I graduated from high school. It’s been a long time. As county executive, I’ve adopted five balanced budgets on time, maintained a Triple A bond rating, one of just six counties in the state with a Triple A bond rating.”

Asked if he thinks the presidential race will have any impact on other races, such as his, Nelson said, “I can only control my race. What will happen at the presidential, the senate, I really can’t control that. It’s important for me to stay focused on what I can control. I’m going to get out there and talk about the issues, things I think are important to northeastern Wisconsin voters. Sometimes those issues will line up with other members of the party, sometimes it won’t.”

About six weeks ago, the Republican National Committee began sending out press releases that referred to Nelson as “Taxin’ Tommy.” Asked what he thinks about the RNC nickname, Nelson said, “It’s funny you bring that up. They were leveling these attacks the day before I got into this race. I think you should consider the source.”

Nelson then mentioned that during his 12 years in public service, he has knocked on 80,000 doors.

“I think that’s important,” he said. “I bring that up as a segue because the next member of Congress must show a commitment to the community that they wish to represent. I believe I’ve demonstrated that in spades.”

Asked which of the three Republican candidates he would like to face in the November election, Nelson laughed and said, “We’ll leave that to the Republican primary voters.”