When Madeline Tourtelot, the founder of the Peninsula Art School, retired in 1978, the future of the school she built was uncertain.

Tourtelot donated some of her land in Fish Creek to the Peninsula Arts Association (PAA) when she retired, but the fledgling organization wasn’t prepared to manage a school. That’s when Buddy Douglass and the PAA turned to Elizabeth Guenzel, a non-artist and seasonal resident, to reorganize Tourtelot’s creation. 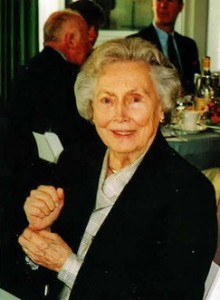 Elizabeth Guenzel was an enthusiastic supporter and contributor to dozens of Door County non-profits.

Guenzel accepted, quickly immersing herself into a circle of icons of the Door County art scene that included Gerhard Miller, Charlie Lyons and Phil Austin, among others.

Though not an artist, Guenzel excelled at bringing people together and encouraging different talents and personalities to work together. Her friends remembered her as perpetually enthusiastic, devoid of ego, and a great believer in the arts and its role in the community, quietly donating time and money to dozens of organizations on the peninsula.

Those organizations lost a champion Tuesday, Jan. 24, when Guenzel died at age 94 in Lake Forest, Illinois. Health issues limited her visits to Door County over the last 15 years, but her passing brought great sadness to those people and organizations she influenced so much on the peninsula.

Anne Emerson, who worked with Guenzel in getting both Friends of Gibraltar and the Door Community Auditorium off the ground, remembered Guenzel’s enthusiasm and mentorship more than her financial contributions.

“Some people think of all the reasons something won’t work,” Emerson said. “Betsy would always give encouragement to something you felt was worthwhile. She transferred this belief to you that allowed you to be more brave in chasing down what you believed in.”

Cathy Hoke, the director of what is now the Peninsula School of Art (PSA), credited Guenzel with laying the foundation for what the school is today. 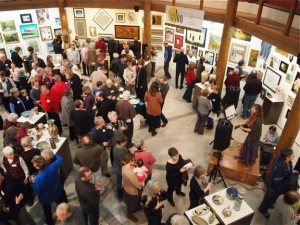 Over 400 people attended the Salon Party at the Guenzel Gallery Jan. 21. The seed money for the gallery was a gift of Elizabeth Guenzel, who helped re-organize the school when Madeline Tourtelot retired in 1978. Photo courtesy of the Peninsula School of Art.

“She meant a great deal to the Peninsula School of Art,” Hoke said. “She shepherded it from the days of the Peninsula Arts Association and into a real school.”

David Aurelius of Clay Bay Pottery said Guenzel’s influence could not be overstated.

“The art school would probably be a much different place without her,” said the former PSA board member and teacher.

When tasked with reorganizing the art school, Guenzel had a vision for a school that would teach to all levels of artistic talent and experience, which her son Bill said may have been rooted in a youthful experience.

As a teenager she took an art class with Tourtelot, who was a summer friend of hers in Fish Creek. The class was taught by the distinguished artist Vladimir Rousseff, a Professor at the University of Chicago, who praised the work of Guenzel’s fellow students until he came upon her work in progress.

“No, no, no,” the professor said as he took the brush from Guenzel’s hand. “Not like that, like this.”

Guenzel would later laugh as she told her kids how the professor proceeded to paint over her work, but the moment stuck with her. When her husband Paul retired the couple began splitting time between Wilmette, Ill. and Fish Creek, where they poured their efforts into the arts community in a very quiet, behind-the-scenes manner. When Paul died in 1996 in the midst of a drive to expand the art school and build a new gallery, the organization honored his efforts by naming the Guenzel Gallery after him.

When Emerson was leading the effort to create an enrichment program for Gibraltar School students in 1982, Guenzel underwrote the coordinator’s position. For 30 years Friends Of Gibraltar (FOG) has been bringing artists, authors, dance troupes and all manor of creativity into the halls of the school.

“She really believed in the idea that all children should be exposed to art,” recalled Jeanne Aurelius, David’s wife, fellow artist, and early contributor to FOG.

Guenzel was an enthusiastic supporter of the Door Community Auditorium and was known for making anonymous contributions to launch organizations or keep them afloat in times of need.

“I wish I would have had the opportunity to work with her,” Bicoy said. “The foundation has been the beneficiary of her family’s generosity, but that’s not what’s most remarkable. What’s most remarkable is how quiet and modest their philanthropy is relative to the unbelievable impact they’ve had on the community. It’s really a testament to their values, that they do this when nobody is watching.”

Aside from the request to name the gallery after her husband, Guenzel shunned acknowledgement for her gifts. In fact, it was a lesser-known affiliation, Bill said, that was one of her favorites. Guenzel spent several years in her retirement volunteering at the Sunshine House in Sturgeon Bay, which provides personal care services, transportation, and employment for citizens with disabilities.

Helping children and adults with disabilities became a passion for Guenzel in her mid-50s, when she was inspired by a teacher at the Hibbard School, located in the Albany Park neighborhood of Chicago. That’s where a teacher named Joyce Meyers worked with children from troubled homes who struggled in regular classes. One day Guenzel approached her to ask if she could volunteer as an aide, but Meyers was skeptical of the suburban housewife.

“Meyers told my mother that she would need to take a few graduate-level classes, probably assuming that would be the end of it,” Bill recalled. “But it wasn’t.”

Guenzel went to night school at the Chicago Institute for Psychoanalysis for two years. She would work with Meyers at the Hibbard School for six years, developing a bond with the once-skeptical teacher.

“She loved it,” her son said. “When she was able to spend more time in Door County in retirement, she naturally was drawn to the Sunshine House.”

Guenzel was born Elizabeth Skinner in St. Paul, Minn. On Sept. 1, 1917. In 1938 she married Paul Guenzel (d. 1996) at the Church of the Atonement in Fish Creek, where her family’s roots date to the late 1800s, before the couple settled in Chicago. She is survived by her son Bill, daughter Elizabeth (Carlin) and five grandchildren, Louis, Phoebe, Renata, Ted and Betsy.

Guenzel will be sorely missed by her family, and also by an arts community she helped nourish from fledgling, to flourishing.