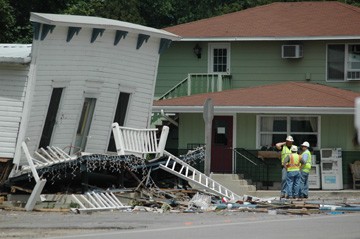 The Viking Grill was untouched in an explosion July 10, 2006, but the Pioneer Store (foreground) was devastated. Photo by Dan Eggert.

Those were the stunning words that welcomed so many northern Door County residents and vacationers to their day Monday, July 10. It wasn’t an entirely accurate description of events, but in the first hours of daylight, it was the best most could do to describe the explosion and its aftermath that rocked the town at about 2:30 am.

Two people, 49 year-old Patrick Higdon and his wife, 45 year-old Margaret Brooks Higdon, of Bloomfield Hills, Michigan, were killed in the blast. They had been staying in a cabin at the Cedar Grove Resort destroyed by what was speculated to be a propane gas explosion.

In addition, the Pioneer Store, a grocery store and 136 year-old town landmark, and another Cedar Grove building were severely damaged. Authorities Wednesday remained unsure if separate blasts or the reverberation from the main explosion felled the buildings. Sheriff Terry Vogel, of the Door County Sheriff ’s Department, said Tuesday the two unburned buildings would be condemned and demolished by the end of the week. The State Fire Marshall, the Door County Sheriff ’s Department, and the Bureau of Alcohol, Tobacco and Firearms were all assisting in the investigation of the explosion.

Officials were perplexed by the pattern of devastation, which left some buildings untouched but others in ruins over more than a 200-yard span. Charlie Most is chairman of the Town of Liberty Grove, which includes Ellison Bay, and was on the scene by 6 am. He could find little logic in the array of devastation.

“Bizarre. That’s about the only thing I can say.”

As of Wednesday, July 12, authorities had yet to determine the cause of the explosion and subsequent collapses. Speculation centered on the theory that leaked propane seeped through fractures in the dolomite beneath Ellison Bay to the two other buildings. Whatever the cause, it resulted in a tragedy witnesses struggled to understand.

T.J. Little, a Milwaukee resident who was staying at the resort in the building adjacent to the explosion, remained stunned hours later.

“It was just unbelievable,” he said, shaking his head in disbelief. “It felt like an earthquake.”

Little said he and his wife leapt out of bed and fled the scene as fast as they could, but not before witnessing a chaotic scene they won’t soon forget.

“We heard three explosions around 2:30 [am],” he said. “There was fire shooting through the roof and the whole front of the house was gone. Within 15 minutes it was totally engulfed. There was stuff falling on cars, huge pieces of glass sticking out of the ground. It was horrible, kids were out hunting for their parents…It’s really sad.”

Lucas Frykman, who lives near the site of the blast, described the sound that shook the village. “I felt it in my bed,” he said. “There were several explosions, and I thought, that’s not thunder. Thunder’s not that loud and it doesn’t shake the g r o u n d like that. We didn’t know what it was, but we weren’t expecting the town to blow up.”

Linden Ray owns the Mink River Basin Supper Club in Ellison Bay and lives about four miles from the scene, but not far enough to avoid the power of the explosion.

“You could hear it from my house,” Ray said. “My bartender called around 2:30 and said Ellison Bay blew up.”

Sister Bay/ Liberty Grove Fire Chief Chris Hecht said the department received a call about an explosion at the Cedar Grove Resort at about 2:35 am. The Ephraim, Egg Harbor, Fish Creek and Sister Bay fire departments all responded.

What they found first was the second floor of the Pioneer Store standing where the first floor used to be. About 100 yards west stood a buckled duplex in the Cedar Grove Resort. Finally, another 100 yards north they found a fire that left what was a large cottage reduced to nothing but charred remnants.

Seven people were brought by ambulance to Sturgeon Bay Memorial Hospital, four of whom were subsequently transferred to St. Vincent’s Hospital in Green Bay. In all, 73 people were displaced as responders worked to secure the downtown area.

The Higdon’s had been on an annual summer vacation with family, including their three children and Margaret Higdon’s parents, James and Margery Brooks. Two of the Higdon’s children were hospitalized and a third suffered minor injuries. Margery Brooks underwent surgery Tuesday.

Highway 42, Ellison Bay’s main thoroughfare, remained closed from the Mink River Basin Supper Club to Lakeview Rd. Wednesday afternoon. Vogel said the stretch would not reopen until the damaged buildings were cleared. The disaster left the center of Ellison Bay shut down through Wednesday, July 12, in the height of the Door County tourist season. A small, placid village quieter than ever, left to do little more than murmur in shock.