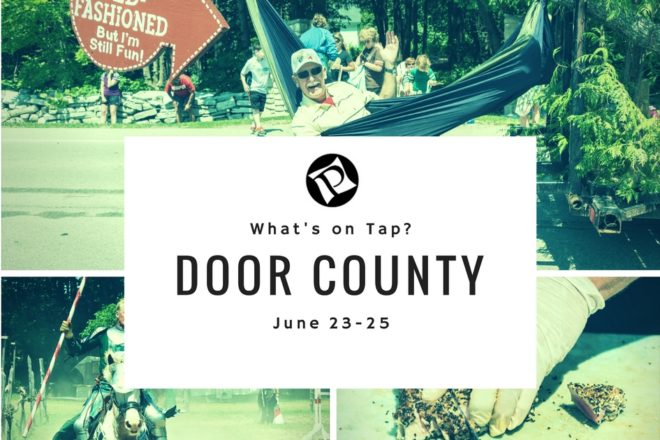 Festivals abound. This weekend, Ellison Bay and Egg Harbor become epicenters of weekend-long festivities. What better time then to spend your weekend away from the crowded shops and commuter traffic? While you’re at it, make your way up to Washington Island for some community theater and, since you’d miss the ferry, spend a night under the stars at the Washington Island Campground.

Written by Gayle Johnson, Steadfast Women/Iron Men depicts early life on Washington Island while it was being settled. Join the Islanders in this community theater piece meant to bring us together through the shared need to find a home. Plan to spend the night on the Island if attending, as the last ferry runs before the play is over. The play runs approximately 7:30 – 9:30 pm.

Uncork Summer, Ellison Bay Days, Door County Wine Fest, Sister bay Sports Day & Paddlefest, and DC Renaissance Fantasy Faire. All on the same weekend. Can you hit them all? If you focus your efforts in Ellison Bay and Egg Harbor, it might just be possible.

Also happening in Egg Harbor is a contemporary rural American art show at Plum Bottom Pottery and Gallery. Stop in to watch a featured artist paint on site at 11 am, followed by a question-and-answer session with a husband-wife artistic duo at 1:30 pm.

Singer/songwriter of folk-infused blues, Grier also goes by another moniker: NYC Subway Girl. A busker following in the tradition of the traveling troubadour. 2 – 6 pm.

The third annual car, motorcycle, and truck show in Little Sturgeon features live music and vendors. “Take it out and show it off.” Proceeds support the Brussels, Union, & Gardner Fire Department. The motor show runs 11 am – 3 pm, with live music from I-45 rock band 4 – 8 pm.