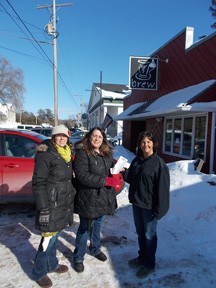 In December, the Ellison Bay Service Club contributed $2,000 to Door County Secret Santa in their effort to help families heat their homes.

“It couldn’t have come at a better time,” said Jane Lee who, with her daughter, Jennifer, co-owns and operates Brew Coffeehouse in Ellison Bay.

This year, Door County has experienced one of the coldest winters in recent memory, and the $17,000 in donations collected by the Lees helped 34 families weather the cold.

This is a true grassroots effort. “Most donations are small,” Jennifer says. “We got almost 40 percent of the total…in small bills and coins dripped in a coffee cup on our counter.”