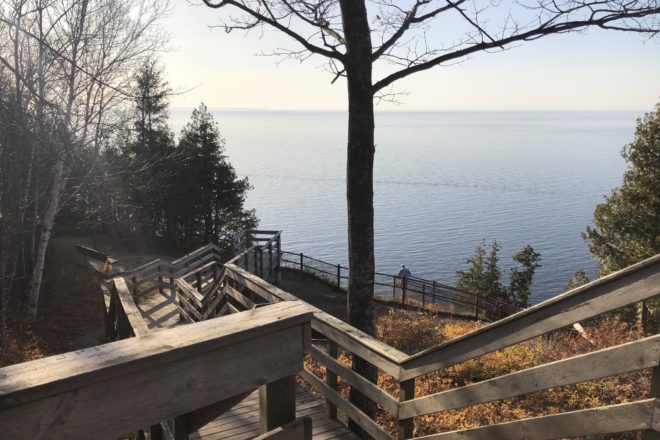 The Door County Board of Supervisors voted to transfer money to cover higher-than-anticipated costs to pave the gravel road leading into Ellison Bluff County Park.

The work has been scheduled, but the only bid for the initial plan to double-chip-seal the road came in higher than anticipated, at $101,386.25. Instead, the Door County Highway Department will charge not more than $100,000 to pave the approximate one mile of roadway. The board agreed to transfer $50,000 to cover a shortfall in the Facilities and Parks Department’s 2021 capital outlay budget for road improvements to get the job done.

The road improvement is necessary because of the volume of traffic and wear and tear on the road, said Wayne Spritka, Door County Facilities and Parks director.

“When that park was first opened and a gravel road installed, we didn’t have tour buses going in there,” Spritka said.

The department occasionally installs car counters at parks to monitor use. Over four days during the first week in October, 2,741 cars entered the park. Even without the car counters, Spritka said his staff can gauge use by the amount of trash that accumulates and the number of times pit toilets must be pumped – and 2020 was a record year for hauling trash from Ellison Bluff County Park, he said.

The paving will have a 20-year life span. It will open the road to bicycles and motorcycles, and it will also be easier to plow. Spritka said signs or speed bumps can be installed if speed becomes a problem.

The Town of Liberty Grove owns the first section of roadway leading to the park entrance. The county won’t be paving that portion. Spritka said the town is potentially putting a project together for that portion for next year.

He said the work would be done in mid- to late summer over about five days.