Today, I’m donning green and gold, breaking out the beer and bars, camping out in front of SportsCenter until kickoff at 3:25 pm. I’ll listen to commentators ask and answer vague questions about their NFL predictions for the day, zone out when they replay Packers highlight reels, make snide comments about Tom Brady, Jay Culter and Tony Romo acting like divas. Do I know them? No. Do I consider myself a kind person? Yes. A competitive person? Not particularly. 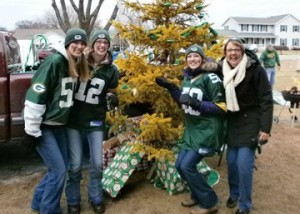 Sharing one of the greatest Christmases with my family and fellow Packers fans in 2011. (Left to right, Holly, Tracy, Sally, and Kris aka Mom Slattery.)

So what comes over me every football season? I’m crazy.

Why do I risk causing car accidents just to gaze at Lambeau Field when I drive through Green Bay? That’s dangerous.

Why do I eat brat buns dyed green? Gross.

Why did I drop what I was doing to call my mom nearly in tears when I learned Brett Favre and Donald Driver were retiring? They don’t know me.

But I’m not alone. One friend has five fantasy football leagues…five. Another owns a van decked out in green and gold, complete with a giant cheesehead and Clay Matthews’ autograph. Another was married in the Lambeau Field parking lot; she exchanged sacred vows in a white Green Bay Packers jersey.

And I don’t think any of this is weird or over-the-top. They are normal Wisconsinites, just like my family, which owns a tacky green and gold fleece throw blanket that clashes with the vintage-inspired décor of the living room, Packers coasters, even Packers bed sheets. 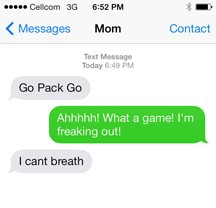 Mom takes to texting – a very new skill – after last week’s win against the Dallas Cowboys.

She shouts while simultaneously turning up the television (because she can’t hear the commentators; I wonder why?). When she leaves to grab a beer or bar, we discreetly turn the blaring volume down a notch or two or three.

When the game is done, her very Catholic father calls and lets loose a string of expletives, no matter the outcome. (Though, he’s working on his swearing these days.)

One of our favorite family Christmases ever was spent sitting on steel benches with 70,000 strangers in 30 degrees watching grown men in spandex throwing, catching, and running after an oval ball.

And at the onset of every season I wonder if my love of the Green Bay Packers will fade. It doesn’t. I wonder if the next game at Lambeau will feel less epic than the previous. Nope. I wonder if it’s weird to top my Christmas tree with a Packers’ Santa hat instead of an angel. Still feels very appropriate.

When I attended the most recent game at Lambeau, (“Sally, that is such a romantic Wisconsin date!” said my mother) and sat next to a 10-year-old boy screaming, “Fail Falcons, Fail,” recent Hall of Fame-inductee Dave Robinson spoke at half time in what he called his “adopted home with 80,000 close friends.” With tears streaming and breath visible from the highest row, he thanked the Packers organization and said, “Dallas calls itself America’s team; the Green Bay Packers, we’re God’s team.” The crowd erupted in agreement.

Amen! I totally believe it because we made a 20+ point comeback last week to kick Dallas’s butts because Romo is a sissy who should have known better than to throw the ball with a minute left on the clock! (See what I mean! What’s wrong we me?)