Slattery’s father created these antler displays (lined up from biggest to smallest) featuring framed photos showcasing the memory of the buck and fellow hunters. 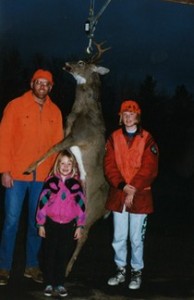 Slattery’s father poses beside a recent kill, circa 1994, with daughters and aspiring hunters Holly (right) and Tracy (middle). Note the absence of Sally, who likely refused to be pictured supporting the killing of innocent animals.

I walk alone through a patch of Minnesota forest, my winter boots crackle and crunch a thick layer of dead leaves as I adjust an oversized blaze orange coat, and hum to keep calm. I am ten years old. Five or six of my father’s middle-age friends wait in a neighboring field with guns ready. I’m, supposedly, frightening the deer their way. I’m frightened. I’m cold. I’m bored.

That was the beginning and end of my hunting career, and in my know-it-all days spanning approximately age 14 to age 20, I declared it a violent, awful sport. “How can you kill that innocent animal?” I would ask my father, a deer hunter since the age of 12.

Now I know better and he tells me, “Well, it’s just being outside, out-of-doors, the challenge, the thrill of getting a deer. It’s nice to have the meat. And the camaraderie,” he says.

For my father, my sisters, dozen of relatives, and many of my Door County friends – walking through woods to flush out deer is nothing. They’ve risen before dawn, practiced shooting a rifle until they can’t see straight, and gutted a deer’s warm insides moments after its death. And they love it. They remember the finest details of that first kill.

“The biggest buck I ever shot was my first,” recalls my father. “I was thirteen years old, hunting with [my brother] Dennis and [my] dad. A deer came across the field and Dennis saw it first, hollered, and I shot – quite a long distance. I remember getting buck fever, when you’re so nervous you can hardly stand up.”

Dad has the 10-point antlers displayed on a handmade plaque complete with a framed, faded picture of the deer hanging high from a tree. My tall, wiry father, uncle, and grandfather stand stoic beside the dead animal, shot the fall of 1967. “We didn’t have a camera,” says my father. “But luckily Priscilla, the neighbor girl, came over and took our picture when we were hanging it up.”

Slattery’s father created these antler displays (lined up from biggest to smallest) featuring framed photos showcasing the memory of the buck and fellow hunters.

The plaque hangs along a row of other antlers and corresponding photos. One showcases a classic hunting image similar to many on display in Midwest homes – my father with six other men sporting orange, holding cans of Point Beer while leaning over four dead bucks. Another features a picture of my sisters Holly and Sara as adolescents, wearing bright orange caps, smiling.

Holly, unlike myself, embraced the sport of hunting and shot her first deer when she was 15. “We snuck up on it on the edge of the woods,” recalls my father. “Before we went hunting she practiced shooting and couldn’t hit the target for anything, so it was surprising that she hit the deer. She sat on her butt, rested the gun on her knee and she got it.”

Though I never shot a rifle, deer hunting was a part – is still a part – of my life. My sisters and I helped dad build deer stands in the Minnesota woods, peel the skin off deer carcasses as they hung from the door frame of the garage, and prepare venison jerky, which I never remember feeling guilty about enjoying.

Over time, I have learned to appreciate my father’s, family’s, and friend’s desire to hunt – it’s part of our heritage as Midwesterners. I hope this great part of the U.S. doesn’t lose that tradition and my father, who already scouted out a place for his stand, shoots another deer this season so I can snack on jerky come Christmas.

For extensive information about hunting in Wisconsin, visit dnr.wi.gov/topic/hunt/deer.html.