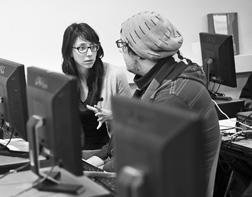 Emilie Coulson checks in with a student who is working on his writing piece for the Young Authors’ Book Project, 826 Valencia’s yearly venture which pairs a class with a well-known author. These students worked with Khaled Hosseini, author of “The Kite Runner,” in preparation for publishing their book. Photo by Monty Suwannukul.

From the time they were young girls, Emilie Coulson and Katie Dahl have been summer best friends in Door County. They both loved American Folklore Theater (AFT) where they worked as volunteers. They liked to write, to sing, and to play guitar. And they shared a fantasy: “Wouldn’t it be fun if we could write a play one day?”

After graduating from Gibraltar High School, Emilie attended Colby College in Maine, where she majored in English with a creative writing concentration. After earning her BA in 2006, she worked for two years both as an English language learner teacher and as an assistant director of the Farnham Writers’ Center in Waterville. And then she found her dream job as programs director for Dave Egger’s project 826 Valencia in San Francisco.

And another dream has come true for her; collaborating with Katie Dahl on book and lyrics, and James Valcq who wrote the score, she has written a play that will be performed during the 2012 AFT season.

The late Fred Alley had been a neighbor of the Coulson family. “I looked up to him as a writer and a community minded artist,” Coulson said. “After he died, Katie and I wanted to write a play in the spirit of what he might appreciate.

“After we finished college,” she continued, “we were sitting and talking: if we were writing a play for AFT, what would it be about? We were in Ellison Bay at the time and had seen the orchard watch towers that had been used by supervisors of cherry pickers.”

As they knew that during World War II German prisoners of war had been used to pick cherries, the idea for Cherryland, USA was born. The young women researched this use of labor by examining newspaper archives and other historical documents, “a crazy, weird part of our history!” Coulson said.

The play written by Coulson and Dahl (who is well-known locally as a singer-songwriter) deals with a wartime family in Door County assigned German POWs to work in their cherry orchard and explores the interaction that occurs.

The writers showed their play to James Valcq who agreed to compose the music. 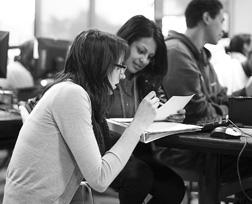 “Everything he writes is beautiful!” Coulson said. Valcq had collaborated with Fred Alley on The Spitfire Grill and other AFT productions and has built a reputation in New York as well as in the Midwest.

“The play is still a baby!” she said. But it will soon be up on its legs.

Like 826 Valencia, which, she said, is “getting on its legs as an established non-profit.” The organization, which takes its name from the street address in San Francisco, was co-founded in 2002 by author Dave Eggers and educator Ninive Calegari. (After his parents died, Eggers wrote a best-selling memoir in 2000 about raising his little brother: A Heartbreaking Work of Staggering Genius.)

The mission of 826 Valencia is to support teachers and students in public schools, to pair trained volunteer tutors to work one-on-one during the school day with students who need attention in reading and writing, and to publish student work in professionally designed and printed publications for an authentic real-world audience.

Coulson, who was raised listening to A Prairie Home Companion with Garrison Keillor’s jokes about English majors, knew that she wanted to make serious use of her degree as a teacher of writing.

“I did a Google search,” she recalled, “and 826 Valencia was the first thing to come up. I liked Dave Eggers as an author. I will get there! I thought. I have to try this!”

And in 2008 she did get in, first as a programs and development coordinator, and beginning last June, a programs director.

Eggers’ dream was to use the building at 826 Valencia as both an office for McSweeney’s (his independent publishing house) and as a writing lab for public school students. But then he learned that because the space was zoned retail, he was required to operate a shop.

As the interior looked something like the hold of a ship, a pirate store became the third part of the operation. The retail aspect began as a gag, selling pirate supplies such as eye patches, parrot food, planks by the foot, and wooden legs; but also the shop sold books featuring student writing and actually made enough money to pay the rent, so to speak.

Coulson’s responsibilities as programs director include training and coordinating volunteers who go into San Francisco’s public schools to work individually with students in classes. Presently over 1,700 volunteers serve more than 6,000 students. She also supervises writers’ rooms at two of the city’s middle schools.

She especially enjoys the Young Author’s Book Project, a venture in which a famous sponsor meets a group of high school students and subsequently writes a forward to a published anthology of their work. This year Coulson partnered with Khaled Hosseini who wrote The Kite Runner. He told the students, many of whom are language learners, about his experience coming to America as a boy from Afghanistan speaking no English.

“We have big release parties for books,” Coulson said, “invite the families, the students sign copies – it is the best moment when it all comes together!”

A number of the public schools that 826 Valencia works with are under-performing and under-funded, as well as burdened with gang violence, poverty, and students who are learning English. Teachers may have 40 young people in a class.

But because of the program, Coulson remains optimistic. “We get to know the teachers really well. I feel lucky to help with teaching, workshops, curriculum, editing and publishing, not as a full-time teacher, but learning from them.”

And she sees the positive impact of publishing students’ work in books that are beautiful.

“They care more, learn more with project-based learning,” she added. “Many of the students we work with have other [disturbing] things going on in their lives.” But a good percentage of them are able to continue their educations beyond high school.

Dave Eggers visits 826 Valencia at least once a week, Coulson said. “He gets to know students and volunteers. Once when he stopped in with Judd Apatow (writer of The 40-Year-Old Virgin and Knocked Up), one of the high school kids asked, ‘Excuse me, sir, but will you look at my screen play?’”

“It’s exciting to work with Dave,” she added. “He’s a huge role model for me.”

From its roots at 826 Valencia, the program has expanded to include chapters in New York, Chicago, Ann Arbor, Seattle, Los Angeles, Boston, and Washington, D.C., and serves a total of over 22,000 students.

Milwaukee would be a perfect place for another chapter, Coulson said. “That is certainly something that has crossed my mind. I’m sure people are doing similar work there, finding ways to get students excited with humor, quirky approaches, celebrities, and volunteers.”

After working with public school teachers, would Emilie Coulson like to be one? “I would love to be a full-time school teacher,” she said, “and I might do it some time! Now I am happily challenged with my work, but I think about it!”

In addition to her collaboration on Cherryland, USA, Coulson writes poetry. She was involved with the Intergenerational Writers’ Lab, a two-month workshop taught by established authors for emerging Bay Area writers. The project culminated in readings and an online anthology.

“I feel really lucky to have had that gateway into the Bay Area writing scene,” she said. “There is a lot of overlap between the 826 and greater writing communities here.”

Visit http://theintersection.org/iwl/2010/intro.html to learn more about the project and to read some of Coulson’s poetry.