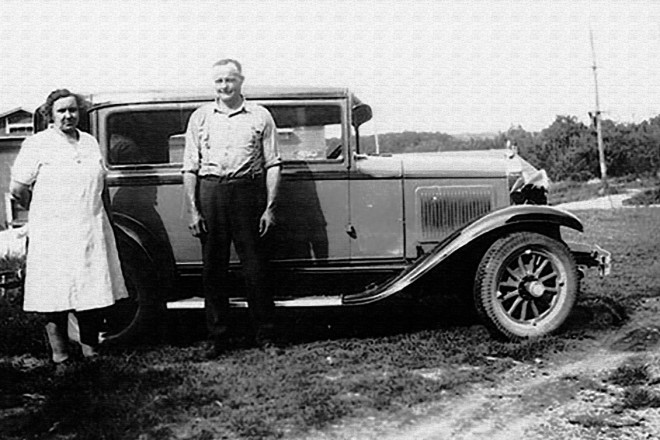 Fourscore and several years ago, a man named Engebreth Husby and his wife began to lease L. Lerner’s general store, in a place we would barely recognize today as downtown Sister Bay.

Engebreth, who was, understandably, better known by his middle name, Martin, had recently closed down his Cherryland Cheese Company and returned to farming full time. So, though he helped his wife to transform the store into a restaurant and passed on the Cherryland appellation to their new establishment, she was the one who would run it for the next four decades. Her name was Emma, and because of that restaurant, Door County has never forgotten it.

Emma Rose entered this world during 1884, late in the month of May. Her Bohemian immigrant parents, Frank and Josephine Lettie, raised her and their six other children in the Rowleys Bay area. Across the street from the current Rowleys Bay Resort stood the district’s schoolhouse, where Emma was educated through fourth grade. Years passed before she was married at the age of 26 to a young fisherman in the German Evangelical church off Highway 57, whence she became, and remained, Emma Husby. 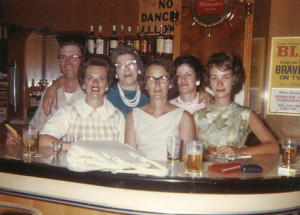 Little is known about that early Emma. Susan Armour, a researcher for the Sister Bay Historical Society, laments the utter lack of either pictures or stories from the proprietress’s younger days. Yet in a way, it simply illustrates all the more clearly why she is remembered. It was not a slim, fresh girl that has kept people talking 40 years after her death; it was an aging, overweight woman – who had quite a lot to offer under her “crusty exterior.”

After 20 years of marriage, which yielded the couple a few fruitful business operations but, unfortunately, no children, the Husbys took over that building on the corner of Highway 42 and Maple. At the time, it had no running water, no electricity and no second floor. Nevertheless, Emma managed to open in July of 1929 and stay open through the whole Depression.

In the beginning, with prohibition still in full swing, the restaurant was the whole show – and Emma did all her cooking on a wood stove. Even after its repeal, the meals and ice cream treats, not just the alcohol, continued to draw patrons for years to come. Emma’s Sunday chicken dinners were legendary, as were the five-cent cones and Black Cows she served.

But though the opinions on the quality of her food are unanimous, the perspectives on the woman herself differ dramatically.

Countless old-timers have told Armour the same story:  when they were kids, “even though they were scared to death of her, it never stopped them from coming in for a Black Cow or an ice cream – they would just get their ice cream and leave!” she laughs.

John Ostran, whose parents worked under Emma as bartender and waitress during the 1950s, was one of those kids; he also ate in her kitchen there every day because she cooked dinners for her staff and their families. Ostran can still recall how the scowl on her face stopped him from fussing about the American fries.

“She was a scary woman,” Ostran agrees, but still, “you got off the school bus here, and you came here.” Even Armour, who plainly admires Emma, admits she was a blunt lady with a “gruff demeanor.”

Yet other sources say nothing of the sort. While speaking with Armour and Ostran at one of the current Husby’s Food & Spirits bar-side tables, an older fellow approached. “I just wanted to tell you Emma was a great old lady!” he exclaimed with a grin. It turned out that when he was about 10, she’d let him sit in her rocking chair while he waited for the newspapers to arrive.

Half an hour later, a woman, who just so happened to be a Lettie, came by and repeated the praises. Other relatives, Armour mentioned, talk about how much Emma loved selling candy and ice cream to the local children. One man even classified her as “a real people person.”

Al Johnson, a dear friend of Emma, once gave a description of her for Nobert Blei’s Door Way that may clear up the current confusion:  “Emma Husby…she was some woman let me tell you. She helped out a lot of people that people don’t even know about. She had a heart of gold…she seemed a very tough person, but underneath – a heart of gold.”

Unsurprisingly, one way Emma helped was with her cooking. A gentleman Armour cares for at Scandia Village in Sister Bay told her how when anyone was in need, Emma would call him and his father to deliver meals she’d made for them.

Del Olson also clarified the matter when responding to a query about her physical appearance:  “Ah,” he hesitated before saying of the “big, probably 200-pound woman,” who wore her silver hair pulled back, “thick stockings, almost orthopedic looking,” floral dresses, and a bib apron – “she wasn’t a looker. I mean, she looked like a mean old lady, but she was not.” Most everyone mentions the terrific wart on her nose as contributing to this false impression.

Olson has lived in Emma and Martin’s old house for years. His family first took it over when his parents purchased it from her after Martin passed away in 1945, at which point Emma moved into the restaurant. If Emma’s tough attitude and ill-favored aspect made it difficult to see her true character, so did her habits when she lived at Husby’s. The place used to have large, long windows at the front, and according to Armour’s friends, “it was almost haunting – there was always Emma, rocking in her chair.”

In time, Emma needed a chair with wheels rather than rockers, though that did not always prevent her from tending bar or cooking for customers. Ostran, who is also the grandson of Emma’s sister, recalls that his aunt Angie stayed there with her (there were rooms for rent on the second floor) and had to replace bandages for the sores on her legs every day. Angie also brought her customary bit of brandy every night, but occasionally, Emma wheeled out of her room for more. Once, after a few too many nips, she fell out of the chair and scraped her famous wart clean off on the edge of a counter.

“She seemed like she never left this place,” Ostran says about her last years. And as popular belief would have it, she never has.

Olson has never experienced it himself, but his sister, his nephew, and his wife, Terry, who all lived in Husby’s upper rooms for a time, swear they would often hear noises late at night which sounded like a wheelchair going back and forth down the hallway to the liquor cabinet or slow steps on the stairs. Even Terry’s dog seemed spooked, occasionally bounding over to the door excitedly when the noises began, as if someone were there about to open it.

Current employees still acknowledge the presence of Emma’s ghost:  a bottle of homemade hot sauce in the kitchen bears a note that reads “Do Not Serve!! – Emma,” and the words “Emma Lives” appear on Husby’s menus and t-shirts. 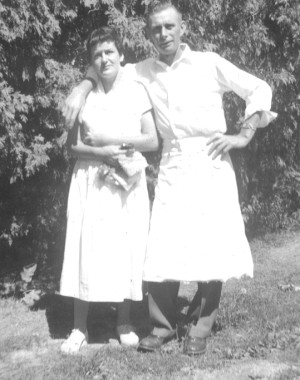 It was also the slogan of the self-titled “Emma Brigade,” Husby’s baseball team from the late 1980s. According to one contributor, it simply meant they were “playing in her spirit.” But James Bastian, who can be found at the bar most every night of the week and still calls the place “Emma’s,” proclaims its literal truth – “Just come back here when it’s dark!” he insists.

But whether Emma’s ghost really still wanders the upper floor of her beloved restaurant, her legacy certainly endures. First, her drinking and dining establishment still retains some of the character she originally gave it. Emma always served the working folk of Door County, welcoming even those whom others would not in that time, such as African Americans and migrant workers. She, along with a group of local businesspeople, helped establish an annual October festival held in celebration of the season’s end – Fall Fest.

Though you may no longer see a parking lot full of tractors on Saturday mornings (when farmers used to get their 10:00 am fix after loading up on the next week’s feed), Husby’s is still the place of choice for many men and women who have labored in this county all their lives, and that autumn festival has grown into one of Door County’s largest annual events.

These days, both at Husby’s and Fall Fest, you will also find a fair share of visitors – but in fact, this is part of Emma’s legacy, too. Emma Husby, for all her rough, country appearances, had grand ambitions for her home village of Sister Bay. Many back then had no interest in attracting outsiders to their part of the peninsula, but Emma stood among the few who did.

And so, decades after she shared her company and cooking with friends and family, we mere sojourners in Sister Bay still benefit from her generosity – because Emma, with that deep-buried but ever-present heart of gold, kindly opened up her home to us.