The current production at Peninsula Players may well be one of the best shows audiences have seen on that stage. The premiere of playwright Sean Grennan’s The Tin Woman approaches perfection, as he tells the story of a heart recipient meeting the donor’s family.

The portrayal of the central character Joy, who is played by Erin Noel Grennan, is noteworthy in several respects. First, she is the sister of the playwright and brought to him the news story that inspired the play. But most important, she is the star of the show, not only because the story pivots around her character, but because as an actress her performance shines throughout the production. 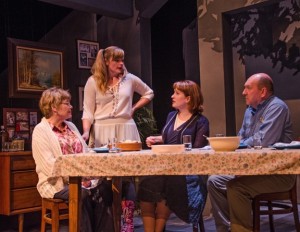 Sean Grennan, who readily admits that he is most comfortable writing comedies, adds unexpected humor to the poignant story of a woman dealing with guilt and depression after her heart transplant; however, laughter results from a tension that is sustained throughout the show rather than punchlines.

But a bit of advice to theatergoers: tuck a packet of tissues in your pocket, and if you are a man with an image to maintain, mumble something about your allergies before the show begins. This writer, who is of an age that he no longer worries about such matters, left the theater feeling as though he had been water-boarded, such was the emotional intensity of the play’s resolution.

The first act is nearly flawless, beginning with a set that is visually stunning and almost magical in its instantaneous accommodation of scene changes. Vignettes seamlessly merge from one setting to another, not only through use of theater technology but through skillful writing. As exposition is gradually reveals characters they become more fully realized. And the audience is drawn into the play.

One element that adds tension to the production is the “elephant in the room,” the constant presence of the heart donor, an aspect that is theatrical rather than realistic, but nonetheless a highly effective device.

The portrayal of the donor’s mother Alice by actress Kristine Thatcher establishes early in the play the character as an anchoring figure in the show. Thatcher’s understated performance brings a quiet strength to the role, the poignant reality of a grieving woman who has lost her son, centering her family’s mourning.

The second act, while not as strong from a literary perspective, continues to be dramatically effective. Perhaps some of the conventions of theater are inevitable: the main character’s quirky best friend and the donor’s ditzy sister for comic relief; the donor’s gruff father who plays the heavy because of a burden kept to himself; and the coincidental connections between the donor and the recipient.

But as constant as is the specter of the donor in the production, are the complexities in the characterizations of the foils, Joy and Alice. Those of us who never think through the implications of receiving a heart transplant may view the gift as similar to winning the lottery, beating the odds by making it to the top of the waiting list and then suddenly experiencing a rebirth of freedom through good health. The process is not that simple, we learn, as we become privy to Joy’s thoughts. However, the sardonic nature of the character, along with her tendency to hold others at arm’s length, keeps the story from approaching melodrama.

Likewise, the character Alice becomes increasingly multi-dimensional as the audience learns of her familial frustrations and her plan for dealing with these challenges. A grieving mother can become pathetic, but Alice is a poignant value center of strength.

The resolution is as emotionally powerful as it is intellectually unexpected; the sobs of a woman sitting in the audience a few rows behind me were audible in the theater. But the ending is satisfying as well as emotionally engaging; those of us who have managed to deal successfully with grief recognize the power of making connections. And the tin woman is not the only character in the show to receive a heart.

The Tin Woman runs until July 6. For tickets call 920.868.3287 or visit tickets.peninsulaplayers.com.