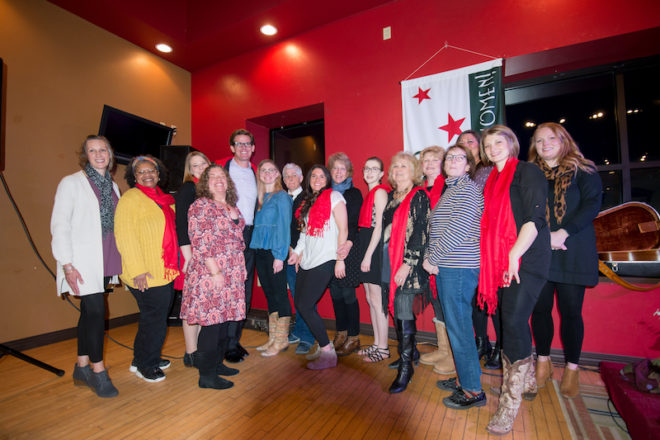 In 2013, a quartet of Door County women who were inspired by the connections that storytelling can make came together to create what has since become one of the peninsula’s most highly anticipated storytelling events of the year: the Women’s Fund of Door County’s Tales of Our Lives.

Inspired by the open-mic storytelling competitions of The Moth, based in New York City, Tales of Our Lives invites a group of Door County residents (typically seven women and one man) to take the stage to share a tale from their life — be it heartwarming, heart-wrenching or humorous — before an audience that appreciates a well-told tale.

From its debut at the Door County Fire Company in 2014, the event and its growing group of storyteller alumni have captivated the minds and hearts of the hundreds of people who have sat in their audiences, creating a deeper sense of community among those fortunate enough to get a ticket for this consistently sold-out event.

“Storytelling is vital to a community,” said Nikki Hedeen, vice chair of the Women’s Fund. “It’s how people communicate. It’s how people are vulnerable and get to know each other, and know that they aren’t alone in their experience.”

Tales of Our Lives committee members select the story slammers, who are encouraged to tell a relatable story that lasts no more than 10 minutes. Storytellers have ranged in age from teenagers to retirees, and they have taken audiences on a roller coaster of emotions through stories of love, loss and everything in between.

The event’s tagline of “empowerment through performance” relates not only to the confidence and empowerment of those who are brave enough to stand behind the mic, but also to the individuals seated before them.

“For someone in the audience who really thought they were alone or has been carrying their own trauma, that they can really relate to what’s gone on with somebody else and realize, ‘I can be OK’ — that hope is so huge,” said former Women’s Fund board member Megan Lundahl.

Hedeen helped to put a face on the fight against slurs used to describe people with intellectual disabilities during the first Tales of Our Lives in 2014. She shared a poem about her aunt and uncle, both of whom were born with intellectual disabilities, and their experiences with insensitive comments. The poem was Hedeen’s rallying cry for people to think about the impact of their words. She hadn’t anticipated the far-reaching consequences of her tale.

“For probably two weeks after in the community, people would stop me and tell me how much they thought about my story,” she said.

That same year, story slammer Holly Feldman had the audience in disbelief-fueled laughter as she recalled the challenging and logic-defying period during her mid-20s when she gave birth to three children in fewer than three years.

The event has been a resounding success for the only charitable fund in Door County that focuses on the needs of women and girls. It has sold out every year — even after becoming a two-night event in 2016 — and has raised thousands of dollars for the organization’s mission of building, enriching and nurturing the lives of Door County girls and women through “collective wisdom and philanthropy.”

Along the way, it has served as an enduring testament to the power of stories.

“It was a good reminder for me that we all have so much more to share, so much more about us that we don’t know,” said Women’s Fund co-chair Jennifer Moeller. “It encourages me so that the next time I’m with a friend or an acquaintance that I think I know, maybe I can ask some better questions or get to know them better in a deeper, more meaningful way.”

Read stories like this and more in the 2020 Door County Living Philanthropy issue, on stands now!

Subscribe to Door County Living or the Peninsula Pulse here>>