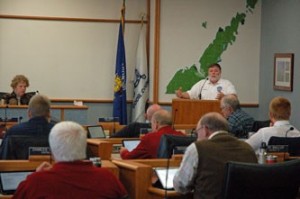 Door County Emergency Services Director explains to county supervisors the need for another ambulance and six staff members to man it 24-7 during the county budget hearing on Nov. 12.

Except for a few questions from several Door County supervisors, the county’s 2015 budget hearing turned out to be an extremely smooth process. Not a single member of the public showed up to speak about the 2015 budget of $74,196,072.

“It would really enhance our public safety communications in the future,” said Tim Ullman, head of the county’s Information Services Department.

“There’s so much interest in this right now that (Wisconsin) Public Service can’t keep up with running wires,” said Supervisor Chuck Brann. “This project could bring in about 160 jobs and open the door to more good-paying jobs with the dark fiber connection.”

The total cost of the three-year operation is $2.5 million, and the county has several options to pay for it.

“It’s up for discussion, how it will be paid for,” said board chair Dan Austad. The board approved the resolution and will send it to the Finance Committee to come up with the best payment option.

The board then moved on to budget discussion, with Supervisor Dave Lienau, who chairs the Finance Committee, and Finance Dept. head Shirley Scalish leading the discussion.

“Each and every one of you have had many, many months to look at this, prepare for it, you’ve all had it in various oversight committees and taken different swipes at it,” Lienau said.

Lienau pointed out that this is the third year with the levy cap tied to net new construction, which amounted to .632 percent in the county, or $148,164 increase in levy dollars above 2014.

He explained that all departments worked hard on paring their budgets, and mentioned a $188,812 reduction in the county Highway Department by delaying repairs to a one-mile section of County TT leading to the U.S. Coast Guard station in Sturgeon Bay.

Supervisor Ken Fisher, who sits on the Highway Committee, questioned the wisdom of getting behind on road repairs.

“If we start opening that path up, you don’t want to be running ambulances down gravel roads,” he said. “We go a mile behind every year and pretty soon we’re on a 20- or 40-year schedule. They’re not all super highways. There are roads we’re passing up that should be done.”

“Again, Ken and I will disagree,” said Supervisor Chuck Brann. “All departments gave something up to make this budget work.”

“We will be adding three-foot wide paved shoulders,” Kolodziej said, adding that they are not calling them bicycle lanes, but they are being added to provide safety for bicyclists.

“Speaking on behalf of bicyclists, that will be a great improvement and I know there will more improvements to come,” said Supervisor Ben Meyer.

Several supervisors expressed concern about the proposed 43.55 percent increase above the 2014 budget for the Emergency Services Department. Emergency Services is exempt from the tax levy cap. The increase is to add another six-member crew to staff an ambulance 24-7.

“The open checkbook that EMS Committee seems to receive, that concerns me, 44 percent this year,” said Supervisor John Neinas. “To me that is a concern. I don’t know how it is for the rest of you. Maybe they could be like the rest of the committees.”

“When you add six new paramedics, it doesn’t take long to get that 40 percent increase,” said Brann, who serves on the Emergency Services Committee. “We’re also looking at a new building to house ambulance and staging.”

Supervisor Dave Enigl agreed, saying homeowners might look at the 44 percent increase and won’t understand why it is there.

Supervisor Susan Kohout, who recently joined the Emergency Services Committee, said 44 percent is a scary number, but she said the case was made to the committee for the increase and she voted for it. “But it can’t keep happening,” she said.

Supervisor Richard Virlee said the case has been made that there is a definite need for another EMS crew. “What it’s boiling down to, what can taxpayers afford? We’re talking about human life. Nothing is more important than that.”

EMS Director Dan Williams said the budget increased significantly because of a significant shortfall – $700,000, he said – in the department’s budget in 2014, which was made before he assumed leadership. “The jump is all in one year because of what happened in 2014,” he said.

“We have an obligation to provide this service,” Meyer said. “It seems like a no-brainer that we’ve got to have this second rig and staff.”

“How do you put a price tag on human life?” asked Supervisor Joel Gunnlaugsson.

“This is the last thing I wanted to bring to this committee,” Williams said, “but you hired me to make the right decisions for the future.”

Supervisor John Bur pointed out that the addition of EMS staff is not just for the benefit of the public, “but also the employees.” He mentioned that in their high-stress jobs, EMS personnel need time to decompress rather than being called back to duty to cover an emergency run.

“I think we have an obligation as stewards of the county to be aware of the situation employees are in,” Bur said.

Chairman Austad mentioned that while the current ambulance garage is sufficient, the county will eventually have to look at a new ambulance facility. “There’s time to discuss and develop the options,” he said.

The 2015 Door County budget passed on a 20-0 vote (Supervisor Leo Zipperer was absent). Immediately after the vote Chairman Austad said, “The budget procedure starts tomorrow for 2016.”