There’s an old saying that a man who acts as his own lawyer has a fool for a client. 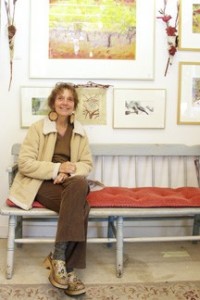 Donna Brown is proof that it doesn’t necessarily apply to self-taught artists. She’s had no training, except for workshops in areas that interest her – and those interests are many and widely varied. Or, as Brown says, “I like to play with a lot of things.” Probably best known for her watercolors, especially flowers and especially irises, she has moved from there in many other directions.

Donna, her husband and their young children moved to Door County in 1994, and she opened her White Barn Gallery at 2496 Meadow Road, just off Highway 57 north of Baileys Harbor. Until she became established as a local artist she spent years taking her paintings to art fairs all over the Midwest.

“After watercolor, printmaking was my second love,” she says, “but I was still working with paper. I do have an affinity for paper.” She has two presses for printmaking in her studio and also teaches classes at Woodwalk Gallery near Egg Harbor, where there’s more room for students.

Oil painting came next, and Brown painted oils on paper for 10 years before beginning to work on canvas. Still, her subjects were from nature. In fact, everything on her studio walls, shelves and other surfaces, as well as the flowers around the entrance reflect her love of the outdoors.

About 18 months ago, she began playing with another idea that involved small items found in nature, paper, oil pigment (sometimes) and encaustic (hot) beeswax that is kept molten on a heated palette. It is applied to an absorbent surface – generally wood, canvas or cloth – and then reheated to fuse the paint. The word encaustic originates from the Greek word enkaustikos, which means to burn in, and this element of heat is necessary for a painting to be called encaustic. This technique was used by the Egyptians around 100–300 AD, as a medium to do portraits of people for their sarcophagi, and also by the Phoenicians to decorate and seal their boats. 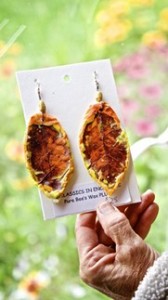 A pair of encaustic earrings.

There has been a resurgence of interest in encaustic art since the 1990s, and the internet has many sources for pricey special tools and electrical palettes used to heat the wax. Brown finds that used crockpots, skillets and pancake griddles from resale shops work just fine. She has also found that the method translates well to creations on paper. “I thought I was the only one using it on paper,” she says, “until someone brought my attention to a book about it. Because I usually work alone, my creations are probably unique, but it’s fun to see what others are doing.”

Brown was intrigued with the idea of using encaustic wax to imbed tiny objects found in nature into paper to create earrings. A display on her gallery wall shows dozens of pairs featuring leaves, bits of bark and other items. “I found with some experimentation that working with wax on paper is an entirely different animal,” she says, “but I love how the natural materials I like to pick up come together with the fluidity of the wax. I am having incredible fun!

“I like to take walks, find a pretty leaf and know that I can do something with it – sort of like kids who iron leaves between sheets of waxed paper. I don’t plan things. They just seem to happen when I’m open to ideas and am willing to start experimenting with the ‘tools’ of different mediums.”

What happened in this case was a set of lovely big earrings. They have the appearance of stone or ceramics, but are as light as, well, paper. “People hear that they’re made with wax and wonder if they’ll melt,” Brown says. “No, they’re very stable because of a bit of resin mixed with the wax.”

At first, she used only tiny leaves to create the earrings. “It wasn’t easy to find two exactly alike,” she says. “Then I thought, ‘Hey, everything doesn’t have to be a leaf. There are all sorts of things in nature that will work, too. And I can paint on some of them.’”

Now she has a growing supply of found objects waiting to become art. Along with her own discoveries are dozens of items donated by other people who have heard about what she’s doing. The encaustic art is showing up in other dimensions, too. Photos are coated with the wax and paint, such as the birch tree with highlights of metallic pigment.

“Nuthatch,” a sculpture made with wax-saturated paper and found materials.

It should surprise no one that Brown’s current fascination with creating jewelry from bits of natural materials, wax, paper and paint has led to yet another art form. She’s begun to sculpt with malleable, wax-saturated paper. So far, she’s created families of robins in two real nests with sculpted mothers and incredibly tiny babies. One group is left in its natural state, the other realistically painted. There’s also a chunk of honeycomb with several little wax bees hovering above it on thin wires. And she’s working on three sculpted ballerinas, that she pictures hanging and floating in front of a series of her art.

Always “playing” with ideas. Always experimenting. Always seeing in what new way she can apply her skills. When the next long-time customer comes by the White Barn Gallery and asks, “So, what are you doing now?” there’s no telling what Donna Brown’s answer may be.