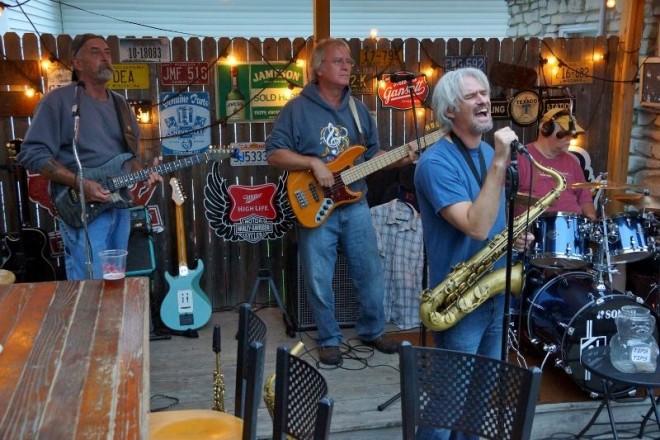 The Big Mouth quartet performs for the final time at The Garage at Husby’s on Aug. 19. Member Woody Mankowski will soon move to LA, leaving Big Mouth as a trio.

Kids who came to listen with their parents 23 years ago are now bringing their own children. And for most of that time, the same four guys have made up the group:  Jay Whitney on guitar, bass, harmonica and vocals; Paul Sowinski on upright and electric bass and guitar; Pat Judy on drums and vocals; and Woody Mankowski on tenor, alto and soprano sax, flute, piccolo, piano and vocals. Where did they come from and how did they end up together in Door County? Now, there’s a story!

Big Mouth actually had its start as the Big Mouth Blues Band, founded by Whitney in Detroit in the 1980s. Sometime in that decade, he also played in Door County with a road band out of Texas and fell in love with the place. Later, when he had a trio in Florida, he talked the group into heading north for a two-week gig at the Blue Ox. He met John Redmann, who owned the Settlement Shops and was a gifted harmonica and guitar player. He invited Whitney to join him, Sowinski and Judy in a band called the Amnesians. Whitney, a painting contractor by trade, bought a house and settled in. Two years later, Big Mouth was reborn in Door County. 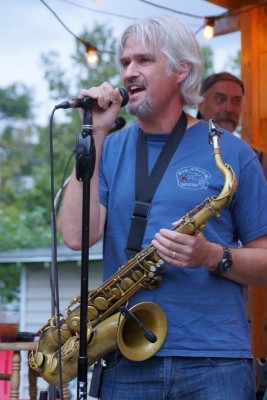 Woody Mankowski performs his final performance with the Big Mouth quartet Aug. 19 at The Garage at Husby’s. Photos by Suzi Hass.

Redmann eventually dropped out to pursue other interests. Mankowski got a call to join the band for a gig at the Nautical Inn on St. Patrick’s Day in 1992. A professional musician/composer, he’d played a lot of jazz with Sowinski and Judy and at least one job with Whitney. The evening at the Nautical was a huge success, and Big Mouth was immediately booked for regular nights there and soon also Mondays at Bayside Tavern.

Mankowski had lots of charts for horns that he’d written for another band. About 1993 or 1994, four horn players who had attended college with him at University of Wisconsin – Green Bay were invited to sit in with Big Mouth for an evening. It was planned as a single gig, but proved so popular that the Power Tool Horns now join Big Mouth about 100 times a year. Mankowski taught sax at Lawrence University for six years and has also had private students. Some form of music has always been his full-time job. He’s written nearly all of the horn arrangements for the band, and Sowinski says that Mankowski also arranged about 90 percent of the 215 songs in his playbook.

Sowinski came to Door County in 1982 for a job at Powell’s Country Inn (now the Arroyo Bay Grill). He played upright bass in a Dixieland band there six nights a week for five years and in the winters “bummed around with Redmann’s band.” From 1999 to 2001 he taught and conducted strings for the Peninsula Music Festival’s youth orchestra, and he’s also given private lessons. He’s made a number of recordings with Fred Alley and Doc Heide, has been part of the pit orchestra for seven shows at Peninsula Players, including the current Nunsense, where you can spot him dressed as a priest, and has toured the Caribbean five times with Eric Lewis.

“It’s nice,” he says, to “fall into Door County’s arts network.” For several years, he taught music in parochial schools in Sturgeon Bay, Algoma and Kewaunee. Since 2011, he’s been the music teacher at the public elementary school in Kewaunee. Like Mankowski, he’s a full-time musician. Incidentally, Ginny Powell, who managed Powell’s Country Inn for her dad, has been Ginny Sowinski for the past 33 years.

Judy fell in love with a drum set at 14, 51 years ago, and has been playing ever since. He spent nine years on the road with five- and six-piece “showy dance bands,” playing in 27 states, Mexico, Canada and St. Thomas, and another decade playing jazz, R&B and blues with organ trios and quartets in lounges around Ohio.

“I had five drums, nine cymbals and six tom toms in those days,” he says. “It was quite a show when I did a solo.”

In 2007, he played a jazz cruise out of Ft. Lauderdale, where he met and sat in with “people I’d listened to all my life.”

When Judy’s wife, Susie, was ill with cancer in 1999, he took her to Florida for two years to be close to her family. After she passed away, he got calls from friends all over the country, saying, “When are you coming back?” Except for his Door County friends. “They said, ‘When are you coming home?’” Judy recalls. A buddy in Florida bet him that it would take a while to find work when he returned, and Judy told him if he got a phone installed on the day after he got back to Door County, he’d have a job by the weekend.  He did better than that. The phone was hooked up on the very day he moved in, and a call at 7 pm lined up a weekend gig. 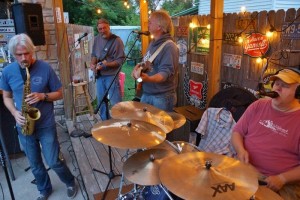 Big Mouth quartet performs at The Garage at Husby’s on Aug. 19.

So, after a two-year hiatus, the Big Mouth quartet was back together in 2001. They’ve recorded five CDs – the first in ‘93 with the quartet – and the rest with the Power Tool Horns. The 14-year run since 2001 came to an end on Aug. 19, 2015, when the quartet played together for a final time – a concert at Husby’s Garage attended by many of the faithful who had been there since the beginning.

Mankowski’s family is moving to Los Angeles, where he’ll have better access to the contacts he’s made in recent years as a vocalist and sax player with the Underthinkers, the band formed by Paul Allen, co-founder of Microsoft, billionaire and philanthropist. Mankowski has toured the world with Daryl Stuermer’s band, Genesis Rewired, and was recommended to Allen by Greg Koch, a Milwaukee guitarist. Mankowski returned recently from a song-writing session with Allen in Italy and an appearance in Cannes, France.

Along with playing with the Underthinkers, he also hopes to pick up touring jobs and studio work in film and recording. Another reason for the family’s move to L.A. is son Jackson’s acceptance by the Los Angeles County High School for the Arts. Now 16, Jackson started guitar at 13 and began playing professionally a year later.

Parting is hard for a group that’s been not only band mates, but also close friends for so long.

“We’ve been together through marriages, births and deaths,” Sowinski says. “We’ve been like uncles to one another’s children. It’s a family.”

Big Mouth will continue as the trio that’s always been the core of the band, occasionally picking up a fourth member and, for many gigs, the Power Tool Horns. They’ll continue to transcend generations, as they’ve always done, playing what people like to hear, keeping audiences happy so they’ll keep coming back. They already have bookings into 2017.

And the name Big Mouth? Whitney, who originated it in Detroit in the 1980s, doesn’t really remember where it came from.