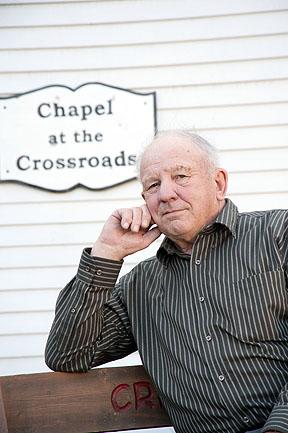 George Evenson at Crossroads at Big Creek in Sturgeon Bay.

On Oct. 1, 1926, Hjalmar Rued Holand, the author of more than a dozen books, including three on Door County history, called the first meeting of what would become the DCHS at the Union Hotel “for the purpose of considering the advisability of organizing a county historical society.” 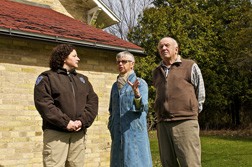 H. J. Sanderson presided as chairman, Holand was elected president, and the other officers were: H. E. Stedman, vice president; William J. Gilson, secretary; and R. C. Koehn, treasurer. There were 104 members. One of the group’s first actions was to pledge $100 from its $350 treasury to help the Ephraim Men’s Club pay for erecting the memorial totem pole in Peninsula State Park.

Two months later, on Dec. 8, the organization held a dinner meeting at the hotel, starting a tradition that continues today. In the 20 years Evenson has been involved with the DCHS there have been about 160 of those dinner meetings, including 112 over which he has presided as president. The one held Nov. 24 at Prince of Peace Church in Sturgeon Bay was the end of an era, as Evenson turned over the presidency to his successor, Linda Sealey.

“There comes a time,” Evenson said, “when you’ve done the things you wanted to do. There are other things to be done, but there are other people who come along to take a new look at things and get some new blood in the organization. I think it will go well. Over the years, we’ve never had troubles of any kind. Things have always gone smoothly and have always worked out financially for us. We’ve gotten a lot done, and we’ve kept alive our mission: To strive to collect, maintain and share the history and heritage of Door County through preservation, education and programming.”

Looking back over two decades, Evenson recalled the organization’s accomplishments of which he is most proud. First, was maintenance of the Eagle Bluff Lighthouse, built in 1868. It went out of service in 1926 – coincidentally, the year the DCHS was founded – and was deserted for 34 years. In 1960, the historical society leased it, with the goal of managing it and providing the opportunity for people to get an idea of what life was like for the families who lived in the early lighthouses.

“A longtime goal of the DCHS was to see this done,” Evenson said. “In 2010 we hired Alan Pape, a noted historical architect, to put together a plan for the continuing restoration of Eagle Bluff to the period from 1883 to 1918, the 35 years the Duclons – William and Julia and their seven sons – were in residence. It is thought to be the first lighthouse restoration in the country and has recently won several awards.”

The society has identified about 20 historic sites in the county, marked them with plaques and prepared a brochure with descriptions of the sites and a map of their locations.

The crowning achievement of the last 20 years is The Heritage Village at Crossroads. It grew out of a presentation by a group of eighth graders from T.J. Walker Middle School at the April 1991 meeting of the DCHS. The students described their experience of pioneer living at Old Victoria, a restored mining town in the Upper Peninsula of Michigan and said it had been life changing. Their comments prompted some DCHS members to dream of establishing a place where Door County history could be brought to life – a little settlement like the ones that sprang up at so many rural crossroads across the Midwest.

About the same time, the Sturgeon Bay Education Foundation purchased 53 acres near the intersection of Highways 42-57 and Michigan Street, and Crossroads at Big Creek was formed. A few years later, the DCHS leased five of those acres, and the Heritage Village at Big Creek began to come to life. It was planned to depict rural life in Door County in the period between 1880 and 1910. 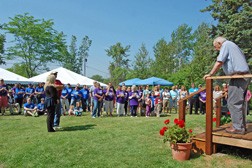 George Evenson speaks to descendants of Hans Hanson during a reunion last summer at the restored Hans Hanson home. Photo by Jim Lundstrom.

The first structure on the site was the Kohl Fish House, moved from Jacksonport in 1993. It was followed by: Vignes School from Southern Door County in 1995; the Heritage Garden in 1996; the Peterson Granary in 2000; the Chapel at the Crossroads in 2001; the Warren House and Privy in 2004; the Greene General Store and the Schopf House in 2005; and the Hanson House in 2014.

The next addition to the historical village is a woodworking/hand tools museum that will be housed in a old log structure salvaged by Mike Madden, assisted by his brothers, Pat, Steve, Shawn and Bill. It will be located south of the Schopf House, along a planned Heritage Trail that will connect the main part of the village with the historic Hanson House. Signage along the way will provide insight as to how early settlers worked and lived.

Evenson’s leadership will definitely be missed. He’s raised more than half a million dollars for the society through the years. Although his longtime presidency has come to an end, he will still be involved. “There are a few loose ends to be tied up,” he said. “It will be interesting and a big load off my shoulders.”

Fewer official responsibilities will also allow Evenson more time to speak to community organizations about Door County history – “the rich heritage we have here in Wisconsin that’s made us the great place we are today.”