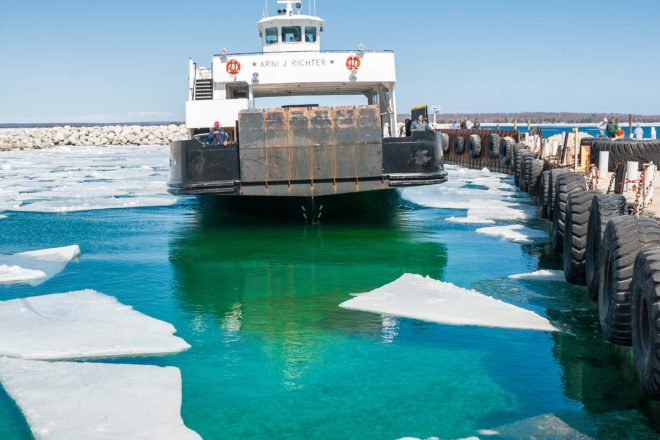 The Washington Island Ferry Line is limiting ferry access to essential traffic only during the COVID-19 emergency. Photo by Len Villano.

It was only natural that Washington Island residents would raise the question: Should we stop running the ferries?

Communities around the country have taken once-unthinkable measures to keep the novel coronavirus at arm’s length. Shutting down bars and restaurants once seemed drastic. Two weeks later, places such as Key West and North Carolina’s Outer Banks have restricted entry. Many of us are following Gov. Tony Evers’ order to leave our homes for essential items only.

On Washington Island in March, social distancing might be an easier proposition than in any other place in the state – if crowds don’t join the year-round residents.

“There was a call by some people to stop running the boats,” said Hoyt Purinton, whose family operates the Washington Island Ferry Line. “They saw people competing for resources and wanted to stop it. Mann’s Food Store was picked clean.”

Town leaders quickly realized that closing the ferry line wasn’t an option because all of the island’s food arrives by ferry, as well as its mail, packages and medical supplies.

“We met with the fire department, police, EMS, clinic, grocery store, ferry line and town government,” said Town Chair Richard Tobey. “It quickly became clear that you can’t isolate the island completely, both from a supply-chain and legal standpoint.”

The Washington Island Ferry Line is a private business, but it’s governed by the Wisconsin Railroad Commission and permitted through a certificate of public convenience or necessity, similar to a utility. On March 26, the ferry reduced its schedule to emergency and essential traffic only.

The island’s population is listed at 708, though residents say it’s closer to 500 in March. That’s 500 people who rely on two ferries per day to get off the island and to receive supplies for grocery stores, restaurants and the clinic.

“It’s important that somebody doesn’t bring it up here,” said Joel Gunnlaugsson, the town’s representative on the Door County Board of Supervisors. “We have a small clinic and just two doctors.”

The island has one primary care clinic that can handle minor emergencies and limited urgent care, according to Dr. Beth Lux. The clinic can perform tests for COVID-19, but has not had to so far.

“It’s a clinic setting,” Lux said. “We have resources up here but putting more tourists here right now would strain that.”

“There’s a fear of a lot of people coming up to increase pressure on those limited resources,” Tobey said. “There certainly were people calling me to say, ‘Shut it down.’ ”

“So there’s a fear of a lot of people coming up to increase pressure on those limited resources,” Tobey said. “There certainly were people calling me to say, ‘Shut it down.’”

Gunnlaugsson’s family had planned to go to Florida for spring break, but instead, he’s at home working through projects and learning how to be a homeschool teacher for his four children. He prefers a softer message.

“We’re encouraging people not to come here – to hunker down at home,” he said. “There’s nothing open.”

According to postal counts the Peninsula Pulse uses to deliver papers to the island residents, nearly 100 homes have restarted mail-delivery service in March, about six weeks sooner than usual, indicating that many seasonal homeowners had already retreated to the place where they feel safe in a crisis.

Purinton said that when the Y2K scare came at the end of the last century, there was a noticeable influx.

“Small is safe,” he said. “I get that. We all have places we feel safe. That’s a natural reaction.”

Tobey said the town has asked those who have come in recent weeks to follow strict social distancing and quarantining, even if they don’t have a likely exposure.

“Anyone who has been off the island, we ask you to quarantine yourself for 14 days to make sure you’re not passing it around,” he said. “We have a network of volunteers who will deliver groceries to you. If you go down to the dental clinic, you don’t have to quarantine, but if you go to Green Bay, where they do have community spread, we do ask you to quarantine.”

In perhaps the most isolated community in the state, it’s not surprising that residents would seek to protect their scarce resources.

“There was the life everyone lived two weeks ago, and there’s life now,” Purinton said. “We’re all having a lot of deep conversations the last couple of weeks.”

EDITOR’S NOTE: This article has been updated to include clarification of the services available at Door County Medical Center’s Washington Island Clinic.