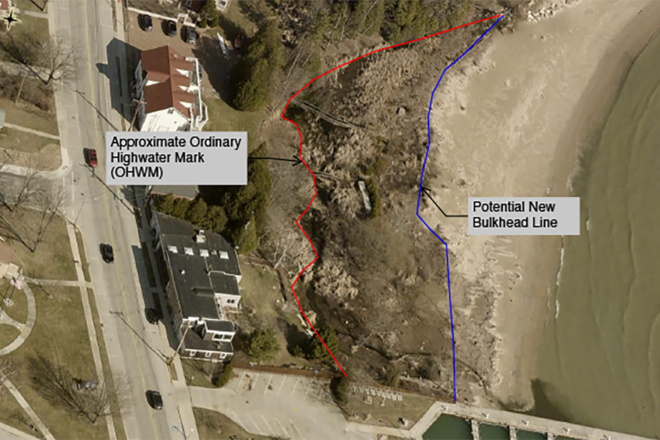 The bulkhead line proposed as shown, which is set by the municipality and different from the ordinary high water mark.

Seeking a solution to a siltation problem, town engineer Steve Parent asked the Baileys Harbor supervisors last month whether they wanted him to create a bulkhead to the north of the mouth of the marina.

For the past year, Parent said he’s sought a solution to siltation and a buildup of muck to the north of the marina jetty. The bulkhead is a shoreline boundary established by a municipality, which can be reestablished, with the new line drawn on surveying maps.

Parent said that for years, there was open water north of almost all of the marina wall in a cove created between the marina and a curve in the shoreline. Over time, wave action has carried silt and organic matter such as dead seaweed inshore toward the rear of the Peninsula Pulse building and Blacksmith Inn property.

The Wisconsin Department of Natural Resources sets the historical “high-water mark” for shorelines, and over the years, it has moved farther inshore, Parent said.

“There’s an ordinary high-water mark where the shore changes from lakebed to upland,” Parent said. “If we do a bulkhead line, that’s a permanent line we can always re-create.”

Making matters worse, a town storm sewer carries drainage from catch basins near the fire station into an outlet located in the silted-in area. Parent says the drainage pipe should lead into the marina and lake, but the stormwater sometimes collects in the muck between the upland and beach.

Parent also asked the supervisors whether he should map a new bulkhead just south of the marina so the town can have more control of the shoreline of the public land that’s currently occupied by the former Nelson’s Hardware and motel buildings.

Also in February, town chair Don Sitte asked Parent whether he would get the marina dredged earlier than last year. Parent said the permit for last year’s project remains open, so it should occur in early spring. Parent also said that sand dredged from the mouth of the marina could be used as fill material in the mucked-up spots north of the marina. He said the soft, silty material from the bottom of the marina is not suitable for that purpose.