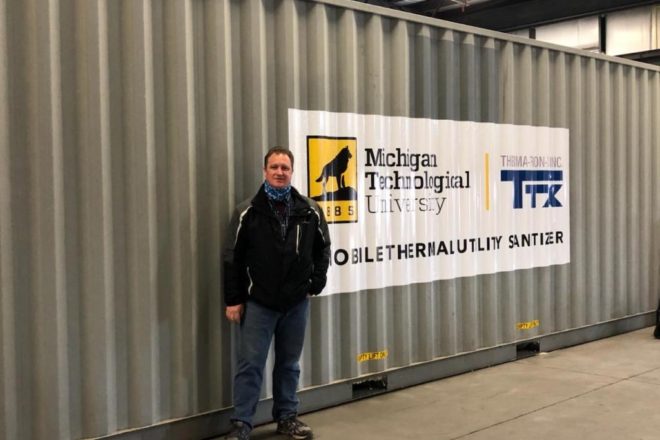 Daniel Barnard is working with his cousin, Andrew Barnard, on a mobile unit to sanitize personal protective equipment for health-care workers. Submitted.

Local companies aid in the fight against COVID-19

When it comes to COVID-19, some current and former Door County residents are fighting back.

Andrew, a mechanical engineer and director of the Great Lakes Research Center, said the idea began as a casual conversation with Dan a couple of weeks ago.

“I said it sounded interesting, so I’d talk to some thermodynamics profs and do some math to see if it is feasible.”

The professors said it looked as if it could meet the CDC’s guidelines for disinfecting PPE, so Amy, a biomedical engineer, called her father – Brad Andreae, owner of Therma-Tron-X (TTX) in Sturgeon Bay – for some practical advice.

“Brad was a huge help,” Andrew said. “We had people who understood the thermodynamics, but he understood how you could put it together with parts you could get in a day or two. We don’t build a lot of big-scale stuff at the university, and that’s what they do at TTX every day.”

Dan and Amy, who run Healthy Ridge Farm in Sturgeon Bay, are listed as co-inventors.

The team at Michigan Tech built the MTU in eight days – astounding speed for a university, Andrew noted. It uses a residential heating unit that they had shipped to Houghton, Michigan, in a day, and most other components, such as stainless-steel racks and trays, came from hardware or grocery stores.

The team received $32,800 in seed funding from the College of Engineering.

The team members have also applied for FDA Emergency Use Authorization and hope to receive approval in days. They have turned it over to the Michigan National Guard and trained nine soldiers on how to use it.

“We tested it to an engineering spec, and it can operate at 170 F for 30 minutes. We want to engage with a hospital downstate to test it with the virus. We don’t have the virus up here, but it’s easy to take the unit to the virus.”

The governor, a U.S. senator and three congressional representatives have been very helpful in pushing the FDA to act, he said.

“Being at a large state university is really helpful in trying to get connections with the feds,” Andrew said. “We have a VP of governmental relations who is tied in to state and federal folks. We really just interfaced with our internal government-ops folks, and they helped us interface with all the different entities.”

It will take testing to see how many times a piece of clothing or mask can be sanitized, Andrew said, but they expect it will be between 10 and 20 cycles.

Itasca is playing a vital role in COVID-19 coping, but it is completely out of sight and two steps removed from anyone with the virus. The company, whose factory is on County T in Egg Harbor, makes equipment to wind wire onto a bobbin to make coils – coils for ventilators that will be made and sold by GE Medical Equipment.

Scott Scharrig, manager of sales and engineering, said a customer contacted the company three and a half weeks ago to ask for one coil-winding machine and also asked what delivery time would be for another five.

“We had one on the shelf and finished it in two or three days, and said another order would take three to four weeks. The next day, the owner called and said, ‘These are for making ventilator parts, and we need them right now.’ We were able to ship three in a week, and they were very grateful. I don’t know how many coils go into a ventilator, but they are gearing up to make 7,000 of these a day – triple their business within a month.”

The New Hampshire-based company Ladesco came back with a request for a bench-top custom terminal inserter – which normally has a 14- to 16-week delivery time – but the company is doing it in nine weeks. It put all three engineers on it, finished the design and began manufacturing it late last week, using its in-house machine shop and buying other needed parts.

Such rushes put a financial strain on companies because they have to buy parts, wait for sales payments to come through and feel pressure to ramp up without knowing whether adding capacity will be financially sustainable. Scharrig said the winders cost $50,000 each, and the custom terminal insert machine costs $75,000.

“How long is this curve going to last on ventilators?” Scharrig asked. “I don’t know, but I know Ladesco is concerned about how much money they are sticking out there for all this. Will the country stockpile ventilators for fall or spring? I am guessing people don’t want to get caught with the shortage we have now, but would a stockpile be government subsidized?”

Scharrig said Itasca is financially strong because it has a wide range of customers. It’s working on a big contract for the U.S. Air Force to rebuild generator motors, and it makes a fair amount of equipment for the automotive industry, from coils for push-button starters to other coils that adjust lumbar supports in seat backs.

In Sturgeon Bay, Therma-Tron-X (TTX) started building a sanitizer on Monday and was finishing work on it by the end of the week.

“We had bought all the parts last week and hope to have a test connection Thursday afternoon,” said Brad Andreae, owner of TTX.

The company makes painting systems for auto assembly lines, water-treatment systems and heat-processing systems. With 70 engineers on staff, it has the skills and equipment to build sophisticated equipment.

Two weeks ago, the FDA changed its specification on the sterilization process for masks, Andreae said. Instead of heating to 170 F with no humidity, the FDA now recommends 140 F with 80 percent humidity.

“Hot air holds a lot of water,” Andreae said, “and if you drop the temperature without first removing some of that water, it will create rain inside the container. So the container needs controls which will reduce the moisture before reducing the temperature.”

The sterilization unit will be able to process 10,500 masks a day and will cost about $250,000, he said. He hopes to ship it to UW-Madison for testing by Monday.