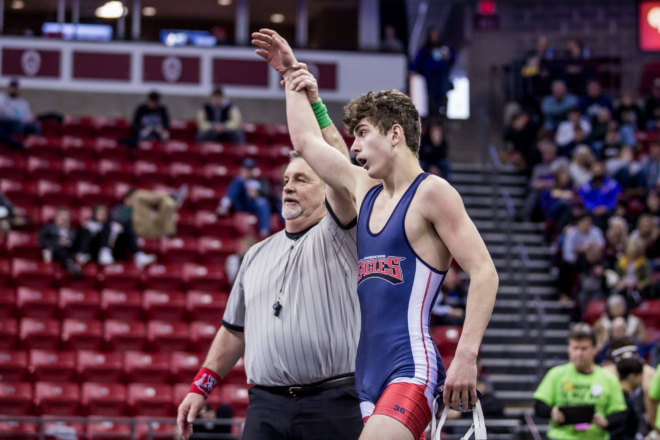 After 132 matches in his wrestling career at Southern Door High School, senior Grant Englebert is banking on wrestling three more this weekend to reach his final goal.

Englebert, who placed second at 160 pounds in last week’s Valders Sectional, is competing in this third consecutive Division 3 state meet Saturday at Wausau East High School. Three wins would allow Englebert to finish his career with an elusive state title.

“I think [qualifying for state] was definitely more difficult because only the top two advanced out of the sectional,” said Englebert, who recorded his 100th win early in the season and has a 112-30 career record. “The goal is still to win state, and due to the new rules [because of COVID-19], there is less room for error.”

Englebert said his ultimate goal is to avenge his sectional championship loss to Ryan Roy of Wabeno/Leona/Three Lakes in the title match, but he must post two wins before earning that chance. Englebert opens with a quarterfinal match against Boyceville’s Tyler Dormanen, and a win would advance Englebert to a semifinal match against the winner of the other quarterfinal match between David Malin of Aquinas and Cedar Grove/Belguim’s Dylan Teunissen.

Englebert said of his 12-5 loss to Roy in the sectional final that he allowed Roy to gain an early advantage, then spent the remainder of the match playing catch-up. He added that his sectional experience will benefit him during a possible rematch.

“He essentially let me go off the bottom in order to wrestle the majority of the match on his feet, where he is comfortable,” Englebert said. “We spent hardly any time on the mat, so if I am going to beat him, I need to improve in neutral, and that starts with moving my feet more.”

Regardless of the outcome in Wausau, Saturday will mark the end of a long run of success for the Englebert family. Grant’s brother Jacob had an outstanding career for the Southern Door Eagles that included a Division 2 state title at 145 pounds in 2014 and a career finish with 159 wins. Coach and father Jerry was a four-time sectional qualifier and a state qualifier in his senior year during the late ’80s.

“I’ve been able to be mat-side for a number of incredible matches as [Grant] has become one of the best wrestlers in the state,” Jerry Englebert said. “Most importantly, I’ve been able to be by his side, watching him become the person he is. It’s been a privilege to be his coach.”

Grant Englebert was quick to refer to past teammates as family and consider how much the quality of the program has improved since his freshman year. He offered praise to a coaching staff that has been instrumental in his improvement throughout his career.

“Personally, I had some ups and downs in my career,” Englebert said. “With the support of the entire program, I have been able to achieve a high level of success, and this is something I am very proud of.”