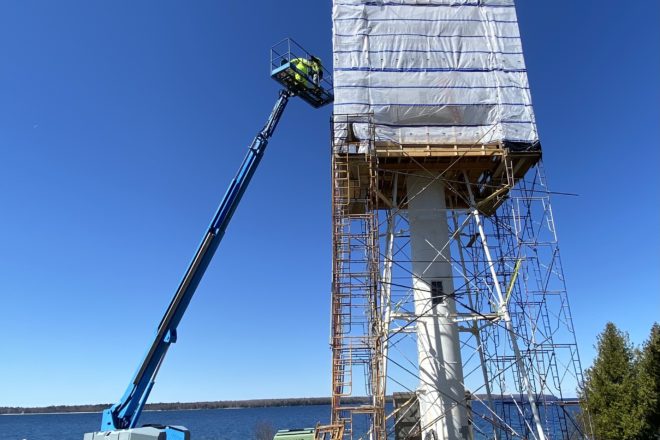 A ride in the Genie S65 to see the restoration work up close and personal. Photo by Tim Sweet.

I never dreamed I would get a chance to ride in a Genie S65 boom lift to the top of a lighthouse and have access to the “holy of holies” of historical maritime restoration projects, but it happened to me earlier this month.

I was standing at the base of the Plum Island rear range light with fellow Friends of Plum and Pilot Islands (FOPPI) board member Patti Zarling. We had arrived to prepare a progress report on the lighthouse-rehabilitation effort that’s currently underway.

“Good morning! Can we come up?” I shouted to a figure dressed in a fluorescent, green jacket near the top of the lighthouse.

In a little while, crew foreman Bobby Olivarez with his assistant, Jose, “lowered the boom” and were back on the ground talking to us.

They are employees of Mihm Enterprises, the company that’s doing the work for FOPPI. Over the course of two weeks, they had erected scaffolding around the 65-foot-tall lighthouse, starting with a crew of six workers that is now down to just the two of them. A wooden platform had been constructed beneath the bottom of the watch-room deck, and the upper portion of the lighthouse was covered in a containment tent designed to capture particulate matter and old paint when the sandblasting begins.

Olivarez asked us, “Would you like to see for yourselves what we’re doing up there? We can give you a ride in the basket, or you can go up the steps.”

We opted to climb the spiral staircase first. All of the old Plexiglas windows and their corresponding metal frames in the lantern room had been numbered and removed. These panels will go to a window manufacturer in Michigan, where new, tempered glass will be custom made using the old ones as guides. The U.S. Coast Guard had removed the permanent, red LED light and put it in storage until the new paint job is finished.

After descending the stairs and walking out, Olivarez again offered us a ride in the basket of the Genie S65. Zarling bravely agreed to go first. She put on a safety harness that was clipped to the mechanical lift’s railing, and soon they were overhead.

Ten minutes later, it was my turn. Olivarez explained the operation of the boom lift so I’d know what to expect. We arrived at a tiny opening in the containment tent about 50 feet above the ground. There we crawled through a small opening that led to a wooden platform the workers had fearlessly assembled. I felt like I had entered the “inner sanctum.” What a thrill it was to get an insider’s view of how this historical structure is going to be revitalized.

Soon the veil (tent) will be torn away, and the light will shine brighter than ever over the waters of the Death’s Door Passage! I can’t wait for the big reveal.

FOPPI recently received a $200,000 grant from the David L. and Rita E. Nelson Family Fund, a donor-advised fund within the Community Foundation for the Fox Valley Region. Another $16,000 still needs to be raised to cover the cost of restoring the bottom of the watch room. The front range light on Plum Island will also be getting a new coat of paint and foundation repairs. Plum Island, part of the Green Bay National Wildlife Refuge, will be open to the public this year through Labor Day during daylight hours only. Learn more at plumandpilot.org.