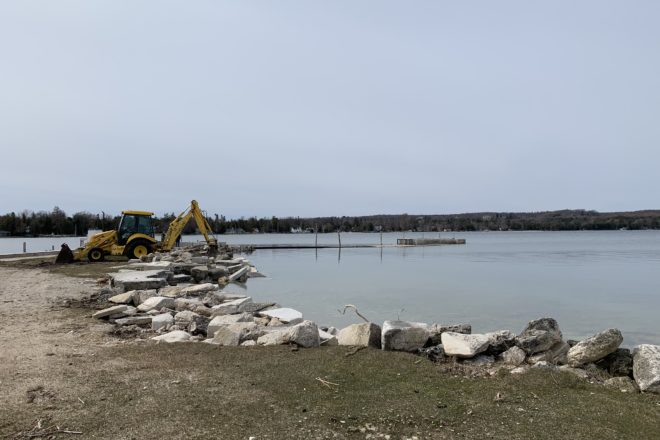 The Village of Ephraim is planning more work to protect its shoreline from high water and storm events. Photo by Myles Dannhausen Jr.

When the gales of November clobbered the Ephraim shoreline the day before Thanksgiving last year, they sent village staff and shoreline property owners scrambling to limit the damage to piers, beaches and property.

Nearly a year later, the village is grappling with how to fight off another round of damage from a lake that remains several feet above its average levels. According to the Oct. 16 weekly report from the U.S. Army Corps of Engineers, Lake Michigan is just one inch below its October 2019 level. That puts it 31 inches above the long-term October average, and 61 inches above the 1964 record low for the month.

On the plus side, that’s four inches down from the middle of September, and 10 inches below the all-time record set in October 1986. The Corps projects that levels will drop another four or five inches by Nov. 16, which would help mitigate the impact of north winds that tend to blow straight into Eagle Harbor in October and November. Ephraim Village Administrator Brent Bristol said he’s kept a close eye on the Army Corps reports.

“It looks like it’s dropped a little more than expected,” he said. “That’s helping. We’re starting to be able to – hopefully – put [together] a decent projection for next year. If it’s average, we should be a couple inches lower next July and August than this year.”

This summer’s high waters flowed over some of the village’s shorefront parks and paths, but the village avoided the worst effects of a strong summer storm in combination with the high waters. Last November’s waves undermined large stretches of shoreline and sent debris onto Highway 42.

The village has prioritized three stretches of shoreline for fixes – roughly between the south end of Moravia Street and the Village Hall – before next summer. The village is evaluating designs from AECOM engineers to build up the limestone wall along the shoreline to add one and a half to two feet of height to the wall.

“We’re looking for function and form in one,” Bristol said. “Our waterfront is one of the highlights of our village. We have to be cognizant of that. Perform and look decent when the water goes back down again.”

A secondary priority is the famed Anderson Dock and boathouse, which houses the Hardy Gallery on the north end of the village shoreline. The historic structure is one of the most photographed locations on the peninsula, and many fear that a bad winter storm or spring ice shove could destroy the building that sits at the end of the dock.

Sarah Zamecnik, the gallery’s executive director, said the summer’s high water caused the Hardy to close for only one day.

“It’s definitely a concern for us, but the season we had went pretty well,” she said.

Zamecnik said that when the high waves on the dock look like bad news for the gallery, it’s actually still dry inside, thanks in part to the sandbags and concrete barriers the village installed. The village owns the dock and building and leases them to the gallery.

“It’s a resilient building for sure,” Zamecnik said. “The village takes care of it pretty well.”

Engineer Mike Kahr has urged the village to take preventive measures to ensure the safety of the building.

“I strongly believe they could lose that building to waves or an ice shove,” said Kahr, who owns Death’s Door Marine but insists he is not looking for the work. In March of 2018, an ice shove plowed into a home in the southern Door County town of Union.

“If they lose that building, they’ll be regretting it for the rest of their lives,” Kahr said. “We’re losing enough of our history already.”

Preventive measures could take several forms. Kahr, who has worked on docks and shoreline protection in Door County for more than 30 years, recommends the village add riprap around the dock to absorb wave energy. Another option would be to raise the entire dock and pour additional concrete. A third option would be to pick up the building and move it to the parking lot for a couple of years until – hopefully – the water goes down again.