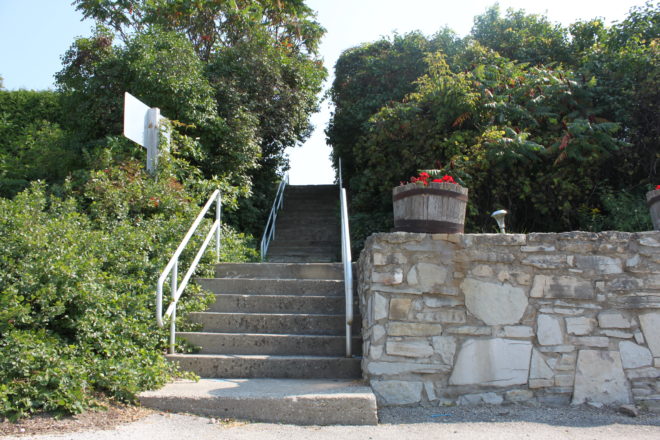 The village expects to begin construction on the Cherry Street steps this fall. Photo by Jackson Parr.

The Ephraim Village Board approved up to $48,000 for Hockers Concrete and Hockers Excavating to reconstruct the Cherry Street steps between Cherry Street below and Cherry Lane atop the bluff. Village officials have discussed the reconstruction of the steps for six years, prompting the go-ahead despite not knowing exactly where the money would come from.

According to Village Administrator Brent Bristol, the village did not have reconstruction of the steps budgeted in 2017. The village will likely look at room tax dollars to fund the project.

“Considering how long this has been on the list of things to discuss and the total magnitude is just under $50,000 for two sets of steps that lots of people use and need to be safe… I think I would be willing to look at room tax dollars,” said board member Tim Nelson.

“It’s a real slippery slope for me,” said board member Paul Roppuld. “When you come with an idea you should come with the funding proposal.”

Roppuld voted for $24,000 to Hockers Excavating to unanimous agreement but against the $24,000 for Hockers Concrete, which still passed 3-1 with Jim Stollenwerk absent.

“We did talk about possibly room tax funds to make up whatever the difference is,” said Cindy Nelson, village board member and member of the physical facilities committee that sent the recommendation to the board.

The village did not approve $78,000 to construct a stone wall at the village beach to replace hedges, with McCutcheon recommending that cost be rolled into the streetscape project.