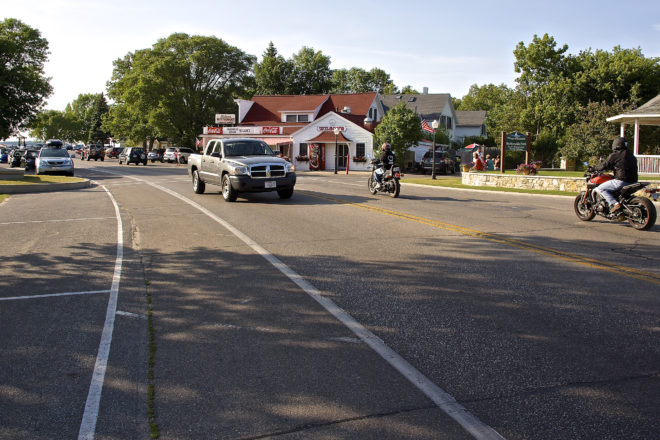 Ephraim will get better pedestrian pathways with resurfacing of highway 42 in 2019. Photo by Len Villano

The Village of Ephraim will undertake an estimated $4.85 million infrastructure project, including burial of power lines, replacement of street lighting and stormwater abatement in tandem with the planned highway resurfacing in 2019. Each individual portion of the project was approved unanimously on June 11 with village board member Paul Roppuld absent.

A petition signed by 40 Ephraim residents to limit spending authority of the village board will not proceed. The village attorney returned the petition to the petitioner, Dick Van de Ven, citing modifications needed to align with state law.

“After contacting many of the 40 registered voters who signed it… we’ve decided not to resubmit that petition at this time,” Van de Ven said, adding that he did still support an advisory referendum of Ephraim voters on the proposed project.

While a few Ephraim residents expressed support of a non-binding referendum, the majority said they wanted to see every aspect of the proposed project move forward.

“We as citizens of Ephraim should strive to make our village a better place to live while we have the chance,” said Matt Meacham, who lives on Ephraim’s north end, outside of the scope of the streetscape project. “I believe streetscape is about improving as a whole, not just making it better for myself.”

“All change I believe is resented initially,” said Fred Bridenhagen. “When you consider the public safety and lack of stormwater abatement, there really is no question, this is the time to do it. I urge you, the board, to pass streetscape in its entirety.”

Board members cited past infrastructure projects the village undertook that were contentious at the time but proved beneficial in the long run.

“The value in terms of quality of life and public safety of each of these projects far outweighs the cost in maintaining them,” Nelson said.

The $4.85 million cost is expected to raise the village’s tax rate to $3.38, meaning an increase of $46.37 per $100,000 of assessed property value. That increase is held down slightly by the retirement of the village’s current debt service in 2019.

Diane Kirkland, former Ephraim clerk, said the village’s tax rate has been kept relatively low for decades and the $4.85 million project is still well below what state statute allows for the village’s debt load.

According to 2015 data compiled by the Wisconsin Taxpayers Alliance, Ephraim had the lowest total tax rate of any village or city in Wisconsin.

The village is expected to begin portions of the project, including culvert replacement and installing the bases of the new streetlights this fall. The rest of the project is scheduled for 2019.