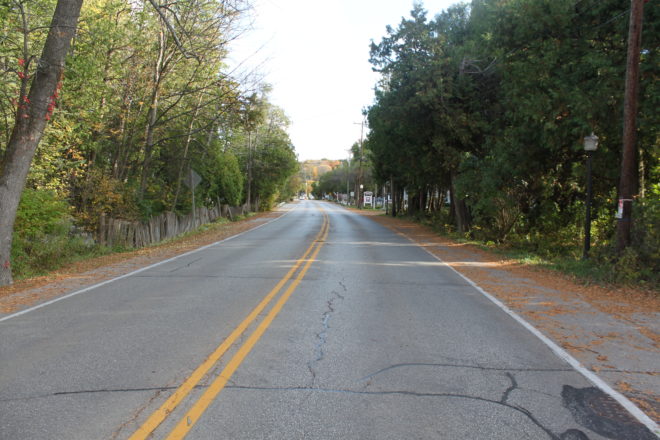 A view of Highway 42 looking north through Ephraim. The village will add sidewalks along the east side of the highway between the village beach and the old fire station. Photo by Jackson Parr.

The Ephraim village board unanimously voted to inform the Department of Transportation (DOT) of their intentions to build a sidewalk and accompanying curb, sewer and stormwater abatement between the village beach and old fire station.

The move comes after months of debate and significant opposition expressed by many residents.

Village president Mike McCutcheon reported that the cost, estimated at $2.1 million, would likely cause no increase to the municipal tax rate once the village retires its current debt service in 2019. The village pays approximately $200,000 annually to service its debt. Municipal finance advisors at Ehlers told McCutcheon that the village could probably take on up to $2.9 million in additional debt after 2019 without increasing taxes.

“If [the board] votes positive for this, then we will know and test the waters as to how much further bonding we would need to do the other projects,” said McCutcheon.

Other projects include burial of power lines, street light replacement, adding green space in front of the village hall and further stormwater abatement outside the Highway 42 corridor.

Opposition to sidewalks continued until the final vote, with residents arguing that the village could complete many of the other projects with the $2.1 million that would not represent an increase to the tax burden.

Board member Paul Roppuld expressed concern with committing to any projects without knowing exact cost and appropriating the money first.

“I can’t in good conscious support a commitment to the state of Wisconsin unless the state is informed by the village in writing that the purchase of goods is at a cost yet to be determined using money the source of which remains unidentified and unappropriated,” said Roppuld.

The village had a deadline of Nov. 1 for providing the DOT with the village’s plans to expand on a basic resurfacing of the highway. While the motion at the Oct. 23 board meeting narrowly focused on reconstruction between the beach and old fire station, additional stormwater abatement projects outside of that portion of road but still in the highway corridor were not explicitly addressed.

“Any stormwater improvement in those non-reconstruction areas needs to be accomplished, needs to be in place,” said Steve Parent, engineer with Baudhuin Surveying and Engineering.

In an interview after the meeting, village administrator Brent Bristol said the village has informally notified the DOT of its intent to replace cross-culverts outside the scope of the beach to fire station reconstruction.

The village will coordinate with the DOT on when to do the cross-culvert replacement, either before the state comes to resurface the highway or during the project.

The village can decide later if it does not want to do a reconstruction, but Nick Becker of the engineering firm AECOM said the village could be on the hook for up to $100,000 for pulling out.

As the village enters into its budget approval session, they may look at additional debt service for the other projects associated with the streetscape project. Any additional projects, including streetlight replacement, utility line burial and additional stormwater abatement would likely mean an increase in the tax rate.