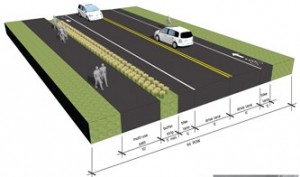 The proposed roadway for the 3,800-foot segment that runs south of the Wetland Preserve to the village limits would include 11-foot motor vehicle lanes, five-foot bike lanes (with buffers where possible) and a 10-foot shared-use path running along the east side of the road. The path could deviate from the roadway to take advantage of adjacent open space systems.

About 20 people showed up at Ephraim’s Village Hall the afternoon of March 2 to hear a presentation from consultant Jamison Brown of the landscape architecture and design firm livingLAB explain the vision for a redesign of the 3.71 miles of the Hwy. 42/Water Street corridor within Ephraim’s boundaries to make it more bicycle and pedestrian friendly and more aesthetically pleasing.

At the outset, Village President Mike McCutcheon said that this would be an informational meeting and that no decisions would be made.

Brown explained that everything he would be talking about came about through consultation with village officials, businesses and residents in previous visioning meetings held last year.

“There was a lot of consensus for making the place safer and more aesthetically pleasing,” Brown said of those meetings. “Water Street should have accommodations for bicycles and pedestrians.”

Hwy. 42 is due for resurfacing through the village by the Wisconsin Department of Transportation in the spring of 2017.

Brown said there was a perception that because that is a state roadway, the village has no say in how that project proceeds.

“We are happy to present to you that is not exactly the case,” he said.

Brown then presented three alternatives for the project.

The first is to let the DOT do its thing. “One of the concerns the village has expressed and that we share, that plan is being done in a bubble without any real concern with what you want,” he said.

The second alternative would be to try to force the hand of the DOT to add bike and pedestrian lanes during the resurfacing project “because federal and state law essentially mandates that the DOT has to do these things,” Brown said. But that would probably require land purchases for rights of way, he added.

The third and preferred alternative is to present livingLAb’s plan to the DOT and hope they become a partner in the overall project.

The plan was presented in three segments:

Segment A – a 3,800-foot-long section from south of the Wetland Preserve to the village limits – would include two 11-foot drive lane, five-foot-wide bicycle lanes on both sides and a 10-foot wide shared use path on the east side of the road. There is no parking designated in this section.

Segment C – a 3,900-foot segment from German Road to Anderson Dock – which is the same as Segment B but would require increasing the current 39 feet of right-of-way to 45 feet.

Brown said the preliminary cost estimate is $3 million, but that could go up if the village decides to include burying utility lines as part of the project. He added that if the plan is acceptable to the DOT, it is possible the DOT may buy into it with their $1 million resurfacing project and conform to the village plan rather than its own.

Creative grantwriting would be an important part of raising the rest of the funds, Brown said. He suggested several options, including the Local Roads Improvement Program, the Congestion Mitigation/Air Quality program that funds transportation projects that contribute to reducing air pollution, Transportation Alternatives Program funding and trail projects grants from the DNR.

Asked how much chance there is of gaining other funding for the project, Brown said he has never done a project that doesn’t have outside funding and that his company is adept at tailoring projects for funding sources. He added that his company has a very savvy grantwriter.

Brown said if the village does not take the step, which is to draw up detailed plans to submit to the DOT, “in 2017 you will get new pavement.”

“My thought is to rip the Band-Aid off,” Brown said in suggesting the village go ahead.

That seemed to be echoed by most of those in attendance.

“There is a lot of positive energy behind this from our community,” McCutcheon said.

A woman pointed out that many village residents are in warmer climes right now and they might feel disenfranchised if decisions are made while they are away.

When the village trustees were asked if they had heard any negatives from the community, the response was that there are always some people who don’t want any change, and both McCutcheon and trustee Steve Sauter said there have been some specific questions from businesses and individuals, and McCutcheon responded by saying the plan allows for flexibility and nuances in dealing with individual concerns.

To see the plan, visit ephraim-wisconsin.com.