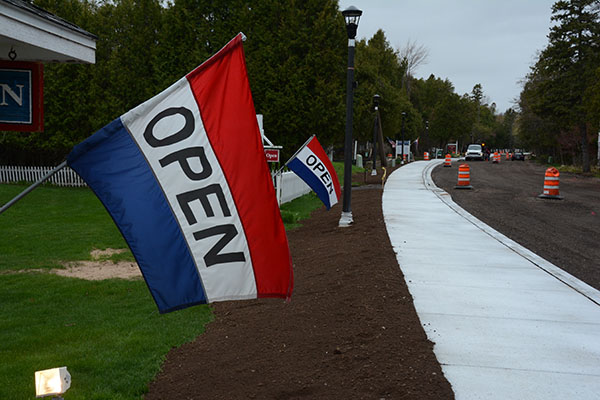 Highway 42 will be completely open through Ephraim for Memorial Day weekend. Photo by Tad Dukehart.

Ephraim business owners are breathing a sigh of relief now that the most disruptive portion of the Highway 42 reconstruction project is wrapping up in time for Memorial Day weekend.

The construction has detoured traffic around the village this spring, and many visitors and residents have avoided the village entirely since work began in March. Bennett reopened for the season May 3 and said his opening-week business was down 45 percent from last year, even though he isn’t located in the heart of the construction zone.

The Door County Half Marathon usually brings hundreds of runners to his front door the first weekend of May for packet pickup at the village hall next door, but construction forced organizers to move packet pickup to Baileys Harbor this year.

“I tell people in Sister Bay they can still drive right to my front door with no interruption, and they don’t realize that,” he said. “With the ‘Road Closed Ahead’ signs in Sister Bay and Ephraim, people assume the entire village is shut down.”

Ephraim Tourism Administrator Lane Methner said that assumption has been hurting the businesses that stuck it out this spring.

“We truly want people to know that Ephraim is open and accessible to both locals and visitors,” Methner said.

Paul Wanish was eager to reopen his restaurant, Czarnuszka Soup Bar, for the weekend of May 18. After that he’ll reopen daily starting Memorial Day weekend. Wanish is normally open in April and May, breaking even in April and scraping a profit in May.

“I really live off my tip money for spending cash, and I’ve had zero for the last two months,” Wanish said. “That kind of hurts.”

He estimates the two months account for a little less than 10 percent of his annual revenue. Contrary to the assumption of many customers, the village does not reimburse businesses for the down time.

“No, and I could technically be open,” Wanish said. “But I’d be serving maybe five people a day, if that.”

The highway will be completely open at noon on Friday, May 24. When it is, visitors will see new sidewalks, curbs and streetlights. They’ll also notice the conspicuous absence of overhead power lines, which were buried as part of this spring’s work.

Crews began laying asphalt May 20. Once completed, the Wisconsin Department of Transportation (DOT) will begin work on its portion of the Ephraim highway project. The DOT will resurface Highway 42 from south of Brookside Lane to Anderson Lane before Fyr Bal Festival June 15.

“The road work had to get done, and I’m glad it’s getting done,” Bennett said. “But for any business, it’s tough. And it doesn’t help my staff. Instead of getting 40 hours right now, they’re getting 20 hours.”

From Memorial Day through June 28, there will be one-lane closures of Highway 42 with flagging operations during nonpeak times: 9 pm Sunday to 12 pm on Friday.

Methner emphasized that the highway work will have no impact on the Fyr Bal festivities.