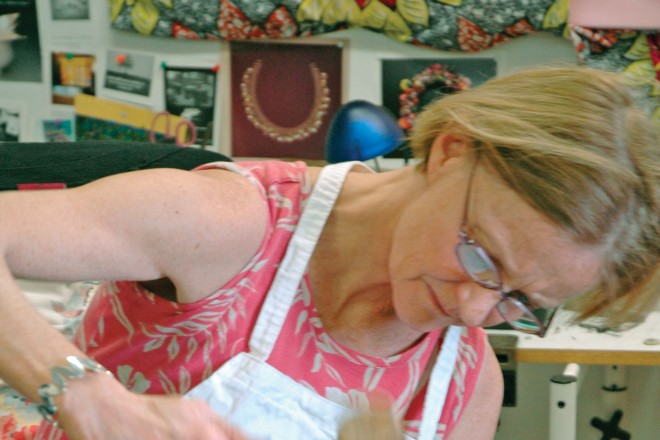 Many Door County entrepreneurs have seen their ideas and enthusiasm quashed by the doubt of a long, slow winter or the unpredictable nature of a tourist economy. It is often less the idea that will make or break a business here, and more the fortitude of the person. One has to work hard, run into a bit of luck, and have a certain sort of affinity for the struggle and sacrifice that is owning your own business in a region with a five-month window to turn a profit.

“You start starry-eyed and idealistic, but then you’ve got to run with a profit and have accessibility. You’ve got to commit yourself to it.” These words are those of Amanda Dewitt, a jeweler who has plugged her way through the fickle Door County economy on her own for more than 30 years.

“The profit margin is not that great,” Dewitt continued. “I wouldn’t recommend becoming a silver-smith. Not to discourage anyone, but you better be sure you can support yourself. After all, if it’s in you, you gotta do it.”

Consider that Dewitt has forged her way while raising three kids on her own, and one has to wonder why. There are certainly easier – and more profitable – ways to make a living.

“It all depends on how you judge success,” Dewitt says. “If you judge success by whether or not you’re getting rich, then no, I’m not successful. But I’m successful in life. I’ve been able to raise my kids and do what I love, and provide us with the necessities in life.”

Dewitt’s is a refreshing take in times when excess is again in vogue. She began her journey by working with her husband out of their own home in 1972. Door County was a different place then, largely undeveloped and untapped.

Dewitt described the seeds of a bourgeoning art community. “It was an exciting time. There weren’t many of us up here yet … so it was a close-knit arts community. Edgewood gallery had just opened; there were Chick Peterson, Jim Ingwersen, Abe Cohn, John Dietrich, Leon Statham, Ruth and Phil Philipon, Dave and Jeanne at Clay Bay Pottery, and Anne and Minnow [Emerson] at Edgewood Gallery. We were all really supportive of each other.”

“To this day, this county really supports artists more than any other I’ve heard of. For our population, there’s no doubt about the generosity. You’ve got the auditorium, AFT, Pen Players, so many places.”

Though she and her husband would soon divorce, she said it was not a difficult choice to continue with the business. “Though I got into the business through him, I learned mostly on my own, through workshops, other artists, and working,” Dewitt said. “I’d gone far enough to see a career, just had a daughter, and I had enough of a reputation. Plus, I had realized that I really and truly am an artist. I may have sort of stumbled into it, but there was a reason I did.”

Her work has resulted in a style all her own. She works almost exclusively in forged and hammered jewelry in sterling silver and 14 karat gold. This unique style has allowed her to carve out a market because there is no way of mass-producing hammered jewelry. Those who want her look and style have to keep coming back, and they do.

“A silversmith develops their own style, and it doesn’t just come out of you, it evolves over years.”

Her workshop in the back of her store is her sanctuary, where the tiny tools of the trade lie everywhere. The walls are adorned with bits of inspiration, clippings of other work, and photos. Here she often toils to the debate of National Public Radio, though at times this conscientious woman admits she has to turn it off to get some work done when an issue gets too much of her attention.

One of her concerns is the inability of a county with so much artistic vitality to attract a younger population base, especially artists. “I’d love it if more young artists could afford to move up here and make a living,” she said. As for the increased competition that would bring, “that’s up to the customer to figure out.”

Many artists find that they must follow a particular routine for their creativity to surface. Dewitt is not one of them. “Life is too chaotic with kids,” she says. “Your schedule changes every day.”

A single mom, Dewitt has had to revolve her business around her kids. This seems an obvious conclusion, but it’s easier said than done, as anyone close to a small business owner can attest. She loves her current location in Ephraim because it gives her kids greater access to activities and friends. The location also offers greater security, a concern that has kept her from working with diamonds as well.

Dewitt’s signature style is recognized throughout the region, as long-time customer Diane Symonanis describes. “Her style is classic, so what you get from her is not going the way of shoulder-pads or big hair,” Symonanis said. “She has a wonderful sense of color and design; her finishing touches are beautiful. And people recognize her work when I wear it. They’ ll say, ‘Oh, did you get that from the lady up in Door County?”‘

Remaining small has also resulted in a different sort of buyer/seller relationship. Her customers often become her friends, and make a special effort to buy from her.

“It’s more than her jewelry,” Symonanis said. “It’s Amanda, too. She’s a very neat, thoughtful person, and that comes across in her work. You feel connected with her jewelry.”