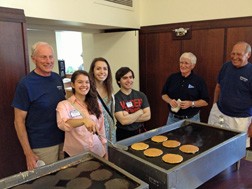 Jauregui, Andrea and Volpe were on hand for the breakfast, greeting diners and serving pancakes. Since the breakfast’s inception half a century ago, it has raised more than $180,000 in scholarships to help students from Northern Door County attend college. Proceeds come from ticket sales and contributions from businesses, Ephraim residents and men’s club members.

The Ephraim Men’s Club, in existence since 1912, is believed to be Wisconsin’s oldest continuing not-for-profit organization. Its earliest effort was to raise money for Northern Door High School, which became Gibraltar High School. It also assisted the development of Peninsula State Park in the early years.