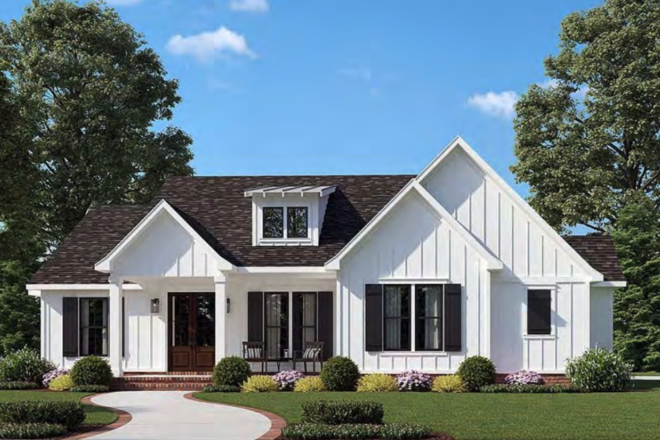 A rendering of the type of homes proposed for a 22-unit development on the north end of Ephraim. The homes would be 1,773 to 2,300 square feet. Source: Village of Ephraim.

The Ephraim Planning Commission tabled a decision on a 22-unit, single-family housing proposal for 15 acres behind the Spa at Sacred Grounds. Though a final decision won’t be made until August, the commissioners indicated they plan to deny the request from Chris Schmelz and Keith Garot for a conditional-use permit (CUP) for additional density on the lots.

Commissioner Ken Nelson said he was prepared to vote no after the commission heard from Schmelz, followed by more than a dozen speakers and letter writers who are opposed to the project.

“The developer has been before us four times,” Nelson said. “In fairness to him and to us, we should decide.”

The rest of the commission appeared to agree, but attorney James Kalny cautioned that a decision without specific evidence to base it on would not stand up to the requirements of Wisconsin law regarding CUPs.

“You need to be careful to be sure you make this decision for the right reasons, not just because it’s what people want,” Kalny said. “I would urge the committee to give me an opportunity to put something together to base the decision on.”

That spurred the committee to table a decision until its August meeting.

Schmelz is proposing homes ranging from 1,773-to-2,267 square feet, with white siding and natural stone materials, with one well for every two units.

On the 10-acre lot zoned Rural Residential, Schmelz is seeking a CUP for a Planned Residential Development (PRD) to build seven units. With a PRD, a property owner is able to cluster residences at a density up to 1.5 times the normal allowance of 2 acres per unit.

On the 6.5 acre-lot zoned Commercial North, he is seeking a CUP for multifamily use. Under the multifamily ordinance a property owner could build up to eight units per acre on that parcel, or 52 units total. Schmelz intends to build 15.

Schmelz said he felt beat up after the meeting, but appreciated the feedback.

“To me, the development is about what’s needed in Door County,” he said by phone the following day. “There aren’t homes for families to buy in Ephraim right now. It’s a spot that makes sense. Looking at the comprehensive plan and the zoning code, it’s all there for something like this on that site. If the village doesn’t want that, that’s fine, but they should change their code.”

Schmelz assured the committee during the meeting that the development would be created with bylaws barring the use of the homes for short-term rentals.

“We’re intending for permanent residents to have the opportunity to buy a new home in the village,” he said.

Though he said the homes would be “moderately priced,” he did not specify what they would sell for.

“The code reads moderate, and that’s relative to the market,” he said, referring to the ordinance language. “Until we know what we’re approved for we can’t say exactly what it would cost.”

In public comment several speakers expressed concerns about traffic impacts at the intersection of Hwy. 42 and Townline Drive, the impact on the aquifer and the density of the development. Those speakers included Planning Commission members.

Commissioner Monique McClean also expressed concerns about density and impact on the water table. She said she recognized the need for housing, but said the presentation from the developers didn’t give “enough information to know if this would even be helpful in the village.”