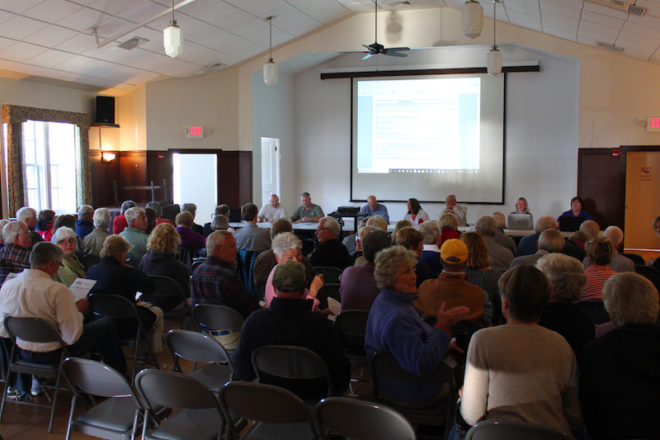 Ephraim residents packed the village hall for an informational meeting about the streetscape project. Photo by Jackson Parr

The Ephraim Village Board laid out the past, present and potentially muddy future of the streetscape project before a packed village hall on June 5, setting the stage for approvals of each aspect of the project in the upcoming weeks.

The total estimate for the entire project, including reconstruction of the highway with a sidewalk between the beach and firehouse station, reconstruction of the Moravia Street and Highway 42 intersection, replacement of streetlighting, stormwater abatement and burial of utility lines, is $4.85 million. What the village is considering the “base project,” without the streetlight replacement and utility burial, is estimated at $2.5 million.

On May 31, Ephraim resident Dick Van de Ven submitted a petition to the village seeking a limit on how much money the village board could spend on a project without voter approval. Forty registered voters signed the petition, triggering the state law that requires the village to formally respond.

The petition asks the village to adopt an ordinance requiring a binding referendum for any village projects that exceed $1 million. If the village board does not do so voluntarily, the question will be posed to voters at the next general election on Nov. 6. If voters approve the call for a new ordinance, the village will be required to adopt it.

“This proposed referendum could give Ephraim voters a voice in deciding which projects should directly impact our property taxes in 2019 and beyond,” Van de Ven said in a statement.

Village board president Mike McCutcheon addressed the petition before residents on June 5, stating the petition was being reviewed by village attorney James Kalny to ensure it was submitted in proper form. If it is, the village has 15 days as of May 31 to respond to the Van de Ven and another 30 days for the measure to be brought before the board.

It is unclear how the referendum would affect the streetscape project. The village is expected to vote on many of the projects associated with streetscape within the next month. If the new ordinance is adopted through voter approval on Nov. 6, it may not impact project approvals made over the next few weeks.

Meanwhile, the village unanimously voted to formally notify the Department of Transportation (DOT) of its intent to reconstruct the portion of highway between the beach and the firehouse museum in Oct. 2017. It is unclear how a new ordinance would effect that project, as funds have not yet been appropriated.

The village of Egg Harbor has a similar ordinance, which came into play during construction of the new library and community center. The village modified the ordinance after a judicial injunction to allow the project to proceed.

Ephraim will be retiring a 2009 debt issue next year. Village Administrator Brent Bristol said the village could undertake a project of approximately $2.7 million without an increase to the current tax rate. In effect, debt from the new project would replace the debt being retired and property taxes would stay the same.

The village’s base project, at a cost of $2.5 million, would actually result in a tax decrease of $3.33 per $100,000 in assessed value after retirement of current debt. If the village adds streetlight replacement and utility burial, property taxpayers would see their bills increase.

The village expects to receive specific cost estimates by June 15 and consider approval of each aspect of the project after that.