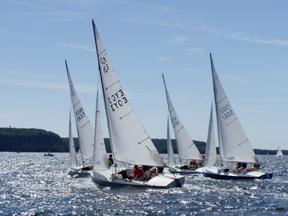 Visitors to Ephraim and Peninsula State Park this week may notice an abundance of sailboats skimming across the waters of Eagle Harbor. This increase isn’t due simply to a busy August week in Door County; it’s the 2009 Flying Scot North American Championship Regatta hosted by the Ephraim Yacht Club.

The Ephraim Yacht Club (EYC) is a not-for-profit organization whose main mission is to educate people in the sport of sailing while additionally promoting amateur athletic sailing competition. To that end, the club supports a membership of about 375, and each summer, one of the main focuses of the club is to teach sailing to Door County’s young residents and visitors.

“We strive to promote a passion for sailing and to teach good sportsmanship. Our primary purpose here is to teach, and each summer we get about 150 student sailors, possibly more,” says Christian Platt, EYC Director. The lesson program is very strong, and recently initiated a scholarship program to sponsor about ten local sailors a summer who were interested in getting involved at the club.

“We have a wonderful community here at EYC,” says Platt. “It’s both family-oriented and fun, while also fostering healthy competitive spirit.”

Additionally, each summer the EYC hosts the Ephraim Regatta, which usually takes place in late July or early August. The famous motto of the club, “There will always be an Ephraim regatta” has rang true for over a hundred years, as the event has been occurring every summer since 1906 and is the longest running regatta on the Great Lakes.

The boat that is utilized for lessons and racing at EYC is the Flying Scot, a day sailer whose owners and racers are committed to the design and performance.

“The Flying Scot is a 19-foot centerboard sloop and it’s the third largest one design sailboat class in the U.S.,” explains Jay Lott, Vice Chair of the Flying Scot North American Championship (NAC).

A one-design sailboat means that all the boats in a class are built to the same specifications, making for fair races. The Flying Scot was originally designed in 1957 by Gordon K. (Sandy) Douglass, and has been in production ever since. Due to strict class rules, the original Flying Scots that were built in the 1950s are identical to the boats built in the 21st century, making it an ideal class for racing and competition.

“The Flying Scot is the perfect racing boat because it means that the competition is based on skill, not on how much money you can spend,” Lott says.

Every year, the Flying Scot Sailing Association, in conjunction with a local sailing club, puts on the NAC, and this year the Ephraim Yacht Club has earned the honor of the hosting the event.

“Some of the membership brought the recommendation of hosting the regatta to the EYC board, and as a group we decided to put in a bid for the event,” explains David Sauter, Commodore of the EYC. “It’s been a pretty substantial undertaking. We have a very committed committee who’ve been working tirelessly to plan the events.”

The regatta’s events will begin on Saturday August 1, when participants must come to Gibraltar High School with their boats to register and be measured. All boats must be cleared before racing to ensure that all Flying Scots are within the correct specifications to make for a fair race.

On Monday and Tuesday, August 3 and 4, the NAC Qualifying Series will take place. All registered participants take place in these three races in order to qualify for the championship later in the week. There is no limit on age for crewmembers.

The Challenger and Championship races will occur Wednesday through Friday, August 5 – 7. Each race will be scored separately and the completion of scoring will take place on Friday along with trophy presentations.

The NAC Committee is expecting 70 – 80 crews to be registered to race, translating into approximately 400 competitors, their families, guests and race volunteers to be traveling to Ephraim and Door County from all over North America. Along with utilizing EYC facilities, regatta organizers will be utilizing Ephraim’s Firehouse Dock to launch boats daily, between 9:30 and 10:30 am approximately.

This is not the first time that EYC has hosted a regatta; in fact, the club has hosted the Midwestern Flying Scot Championship, but hosting the NAC is definitely a larger and more complicated event.

To Commodore Sauter, the NAC is a rare and wonderful opportunity for the community. “We’ve opened the door [with the NAC] for people who didn’t know much about Door County. We’re showcasing the county and Ephraim to a group of people who may not normally come here. Bringing a national event to Northeast Wisconsin is a big deal not just for us, but for our children and our grandchildren.”

Indeed, it is probably a once in a lifetime event to witness for many participants. Sauter jokes, “We’ll host the NAC once every 100 years.”

For those in the EYC membership who race Flying Scots regularly in Ephraim, they could be at an advantage for this event. While most, but not all, of NAC’s take place on the East Coast, this Midwestern event will challenge sailors of all kinds.

“You’ll have to be a versatile sailor. During the week, a sailor may experience everything from flat, light wind, to survival type conditions. A very different skill set is involved in each of those conditions,” says Lott. He goes to explain that even though this is a Midwestern event, conditions on the water can still be very much like ocean sailing. “Depending on the wind direction, we can easily have four to five footers.”

For those who sail in Ephraim regularly, a unique and intimate knowledge of Eagle Harbor’s wind tendencies will certainly come in handy. And for those on shore, an incredible view of the colorful, vibrant spinnakers of Flying Scots will be an image to long remember.

“We have a very competitive fleet with passionate sailors,” says Sauter, “It will be a heck of a show.”