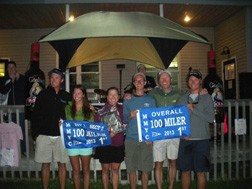 For the second consecutive year, the Beneteau First 38 “Charrette,” owned by Deanna and John Peterson of the Ephraim Yacht Club (EYC), won the 77th running of the Marinette and Menominee Yacht Club’s 100-Miler event.

The race started July 20 in Menominee and circled Green Island, the Fish Creek Bell, Horseshoe Island and Chambers Island before returning to Menominee. Charrette held off the surging Melges 24 “Jonny Rotten” to claim the victory as the breeze began to lighten toward the end of the race.

“Very few sailors have won this race in consecutive years and we are very honored to be able to accomplish this. The competition was very strong yet we were able to build an early lead which really helped as the breeze began to die in the late afternoon,” John said after the race.

In addition to the Petersons, the crew consisted of Isak Peterson, Woody Heidler, Erica Heidler and Brian Ritter, who are all senior sailing instructors at EYC.