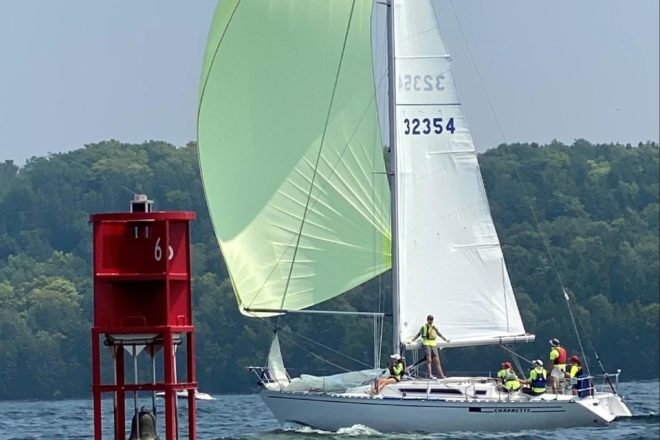 Ephraim Yacht Club sailors raced the Beneteau First 38 Charrette to victory during the 84th running of the Marinette and Menominee Yacht Club’s 100 Miler event this past weekend. This win marked the fifth overall for Team Charrette since 2011.

The racers started July 31 in Menominee, Michigan, in a moderate breeze. Then they circled Green Island, the Fish Creek Bell, Horseshoe Island and Chambers Island before returning to Menominee. Team Charrette was able to stay close enough to the faster boats – including the 52-foot Gritt – to notch the victory with a “corrected” time of 6:04:33. Last year’s race was canceled.

“Because there was no racing last year, we had to build an entirely new team from scratch for this event,” said Charrette co-owner Deanna Peterson, “but everyone really rose to the challenge.”

Her crew consisted entirely of current sailing instructors and former students at the Ephraim Yacht Club, a community sailing center that offers lessons to local youth through a scholarship program. The team began training for the event in June.