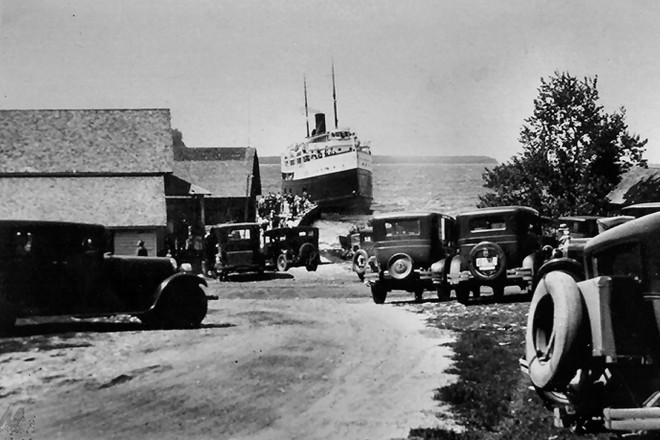 Photos accompany story are from the Ephraim Historical Foundation and its new exhibit at the Anderson Barn History Museum, “The Cat’s Meow: Ephraim in the 1920s”

One of the first things I learned when I began working for the Ephraim Historical Foundation (EHF) is historic preservation doesn’t just mean the preservation of historic monuments, sites, buildings, or relics. While the EHF has lovingly preserved five historic buildings in Ephraim and have opened them as living history museums, I started to realize that the real preservation lies in the stories of Ephraim – the tales of Ephraim’s establishment, its transition from a sleepy rural village into a popular destination for tourists and other summer visitors, and the families and faces that have been a part of the village for generations, contributing both to Ephraim’s heritage and the preservation of that heritage for the future.

This summer two historic landmarks built by the Anderson family, the Anderson Dock and the Anderson Store, will celebrate 150th birthdays, and I wanted to take a moment to tell a few stories about the two landmarks that hold so many memories for so many people.

For many Ephraim residents and visitors alike, the Anderson Dock and all that goes with it – the store, the warehouse (now the Francis Hardy Gallery) – are Ephraim. The Anderson Dock story begins in 1858, when Ephraim’s early settlers sold brothers Aslag and Halvor Anderson 166 acres with the understanding that the two would construct a deepwater dock for community use. The Anderson Dock proved to be an excellent idea, for now any vessel sailing the waters of Green Bay could dock at Ephraim. Thirty years later, the Anderson Dock would serve as a standard port-of-call for passing steamships. The Goodrich, Hill, and Hart Line steamers stopped on their appointed rounds, bearing the summer vacationers that would begin to fuel Ephraim’s economy around the turn of the century.

Anderson Dock quickly became the business and social center of the community, with the Anderson Warehouse built that same year. The warehouse had numerous functions over the years. When the dock was constructed, the original warehouse was used to store incoming supplies. Later it served as temporary housing for fresh fish, cheese, and cherries ready for export. In the 1920s, the warehouse served as a silent movie venue. This building was also constructed by the Anderson brothers, and it had to be rebuilt twice – the first warehouse was destroyed by a windstorm in the early 1880s and again after a fire around the turn of the century.

Though the dock and warehouse were initially vital to Ephraim’s commercial well-being, the dock’s profitability faded as roads replaced shipping, and by 1932 both the dock and warehouse had begun to deteriorate, falling into serious disrepair by 1949. High water had weakened its base and truckload after truckload of stone had to be brought in to shore up the foundation, and an ice shove damaged the dock to the point of being dangerous. In 1949 the Anderson family sold the dock and warehouse to the Village of Ephraim. The village and the Ephraim Foundation contributed funds towards its repair, and in exchange for the foundation’s support, the village leased the warehouse to the Ephraim Historical Foundation.

From 1961 to 2001, the EHF sublet the warehouse to the Hardy Gallery of the Peninsula Arts Association (the gallery gets its name from Francis Howe Hardy, an Ephraim summer resident from 1930 –1960 and a tireless advocate of Door County artists).

The Anderson Store was built in the same year as the dock and the warehouse, and was operated by Anderson family members for almost 100 years until the store closed in 1958. Upon its completion, the store complemented the dock and became the hub of village activity. Sailing and cargo ships would come into Eagle Harbor to take fish, lumber, and cedar shingles to Milwaukee and Chicago. In turn the ships would deliver much-needed supplies of fresh fruit, tools, clothing, and other merchandise to be sold at the store. All sorts of products were sold at the store – everything from spices to coffee to cheese to stylish clothing. “Unmentionables” were discreetly stored on a bottom shelf. Later on in the 1880s, when the steamship lines began transporting travelers to and from northern Door County, the store served as a waiting room and welcome center for summer visitors.

Several of the Anderson children were instrumental in running the store and raising their seven brothers and sisters. Anna, their mother, died in 1890 at the age of 46 with three of her children still under the age of ten. Aslag, their father, passed away shortly thereafter, leaving the family responsibilities and the store’s operation to eldest daughter Lizzie, her sister Munda, and eldest son Adolph. The siblings ran the store until 1958, when Miss Lizzie passed away. At the time, Adolph and Munda were well into their 90s and unable to continue its operation.

The Anderson Store was subsequently purchased by the Village of Ephraim with the help of EHF, and in July of 1967 it reopened as a store and a museum. Restoration of the store was aided greatly by the fact that the Anderson’s never discarded any merchandise – anything that had gone out of style or hadn’t been sold was carefully stored away. As a result, much of the antique clothing and many of the items now on display at the store are “new” – found in the attic in their original boxes. Photographs in the Ephraim Historical Foundation’s archives show that that merchandise and fixtures were replaced in their original locations and the store appears very much as it might have in the days that the Anderson’s were the proprietors.

As an employee of the Ephraim Historical Foundation I am a bit biased, but I find the story of the preservation of these two Ephraim landmarks extremely uplifting and hopeful. I am glad that the village of Ephraim, and Door County in general, is so committed to saving pieces of our past. It is these buildings and landmarks that give our communities character and set them apart from other communities.

The Ephraim Historical Foundation, with support from the Village of Ephraim and the Francis Hardy Center for the Arts, is throwing a party to celebrate the 150th birthdays of the Anderson Dock and the Store – a “Dock Party,” June 12 from 5 – 8:30 pm. The party is free and open to the public, with a small fee for those interested in the picnic supper and the pie and ice-cream social. The party will take place within the Anderson Historic District, with the Anderson Store, Anderson Barn History Center, and the Hardy Gallery open for the evening.

For more information call the Ephraim Historical Foundation at 920.854.9688 or visit http://www.ephraim.org.