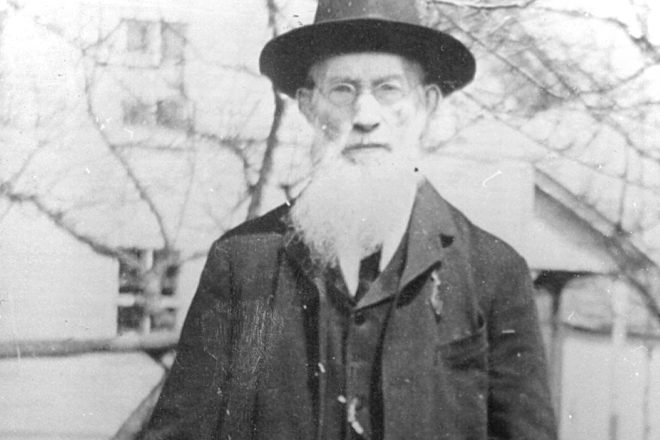 Some wars stand out amongst the sea of conflicts mankind has suffered through. The American Civil War is one of them. On June 16, the Ephraim Historical Foundation will open its summer exhibit detailing the stories of eight Ephraim residents who volunteered to enter one of the bloodiest times in U.S. history. This is the story of one of those men.

Born in central Norway in 1829, Carl Nelson would one day be declared to be “The Oldest Norse Veteran of the American Civil War” when he was 96. His story is one that we might not have heard before, were his adoptive home not Ephraim.

Carl came to the United States when he was 25, first attempting to settle in Chicago with his wife Stina. There Stina gave birth to a baby girl, Minnie. Carl found work outside of the city, which was in the grips of a cholera outbreak.

Work led Carl to a lumberyard in Escanaba, Michigan, a budding port town later to be crucial to the Union supply line. It was at that job that Carl met a few unlikely yet persuasive figures: three young Norwegians almost as new to America as Carl was. Halvor and Aslag Anderson, who would build Ephraim’s Anderson Dock two years later, were working in that very same lumberyard with Thomas Goodletson, who had recently brought his family to Wisconsin. It was from them that Carl heard about a small village of Norwegian Moravians on the western coast of the Door Peninsula that had just been settled, led by Rev. Andreas Iverson. Life there was very hard, but it had promise; the community of hard workers – who spoke Norwegian, no less – had an attractiveness that disease-ridden Chicago did not. Goodletson convinced Carl through a letter to walk across frozen Green Bay from Escanaba to see it for himself.

Carl, then 27, hired a sleigh to bring his family of three to the Wisconsin wilderness of Ephraim. The government gave them, the seventh family to settle in Ephraim, a 32-acre plot of land to start their life. In the next six years, Carl and Stina made a home in Ephraim, having two more children named Samuel and Emilie.

Tensions were brewing as Carl and Stina’s family began their life in Ephraim. Talk of slavery, of states’ rights, and of secession throughout the 1850s came to a head in the 1860 presidential election. Carl, now in his thirties, was a staunch opponent of slavery. He writes in his 1906 autobiography, “The [Southern] slaveholders quoted the Constitution, saying ‘No one shall deprive us of our property except the Court,’ and claimed the highest law in the country gave them this right.”

“But slavery was contrary to the forefathers’ principles. In the northern states having slaves was thought to be an unchristian practice. The Declaration of Independence gave each man the right to freedom and the right to go where-ever he wished.”

Within the year, Abe Lincoln became the first Republican in the White House, the Confederacy had attacked Fort Sumter, and the call to war reverberated throughout the country. Carl heeded that call promptly, along with five other Ephraim residents. Two more would enlist in the coming years, including Thomas Goodletson’s son, Goodlet Goodletson. Six of the eight had immigrated from Norway and one from Germany. “When the order for the draft came,” Carl wrote, “the drum roll went through the whole country, and the best and the strongest of the young flocked to the massacre.” Carl enlisted in late February of 1862, leaving his three children and his wife Stina, who was then pregnant with their fourth child, to brave the rest of the winter.

Carl joined Company F of the 15th Wisconsin Volunteer Regiment, a regiment comprised almost completely of Norwegians and other Scandinavians.

“The Scandinavians followed the news with great interest,” Carl wrote, referencing the early attacks by the Rebels upon Union forts. “America was now their fatherland…These boys [Scandinavian Union troops] were hot-blooded and courageous. Many left, but only a few of us came back.”

War is filled with stories. Most are gruesome, many are bleak. Carl’s autobiography avoids these details. In an account of one battle, Carl recounts the firing of Confederate cannons as it mixed in with the sounds of a storm:

“On the afternoon of the 6th, a quick terrible thunderstorm struck as if the heavens would split…We stood watch along the length of the river within sound of the cannons, lightning, rain, thunder bolts and gusts of wind – the heaven’s awesome artillery.”

Carl’s wartime experience was not without bloodshed, however. During a battle in Georgia that claimed his commanding officer, Carl was severely wounded. In 1863, after two years in battle, Carl was sent home. He and Stina had three more children, living their lives in relative peace until Stina passed away in the 1870s. With seven children under the age of 20, Carl quickly remarried. He and his second wife, Marie, would go on to have two more children.

Carl filled his time tending his field. He was also an amateur printer; a printed copy of his autobiography was found in the attic of the original log cabin by Don Nelson, Carl’s great-grandson, when they bought it from relatives in 1995. The cabin had stayed in the family after Carl left Door County in the early 1920s. In 1926, eight years after the end of WWI, Carl died in Nelsonville, Wisconsin.

Carl’s book was in Norwegian. In 1996, with Don Nelson as the president of the Ephraim Historical Foundation, Carl’s autobiography was translated by another local, Dorothy Halvorson.

“When we came here [to the Ephraim Historical Foundation], very little was known about Carl,” Nelson said. With the help of the documents found in Carl’s attic, including church pamphlets printed by Carl and war-time letters of Carl’s family, we know his story in great detail.

And so goes Carl’s story, stretching almost a century and extending beyond his lifetime through his family and through the hard work of motivated parties to keep history alive. The hope is that stories about the past bring events closer to us; that putting it in context cements it into a more coherent timeline; that these stories, and the lessons which come with them, won’t fade away.

Find Carl Nelson’s story, along with the stories of seven other Ephraim residents who fought in the Civil War, at the Ephraim Historical Foundation’s summer exhibit, When Johnny Comes Marching Home. The exhibit opens in the Anderson Barn Museum on June 17 and runs through Oct. 14. For more information, contact Emily Irwin at [email protected] or 920.854.9688.