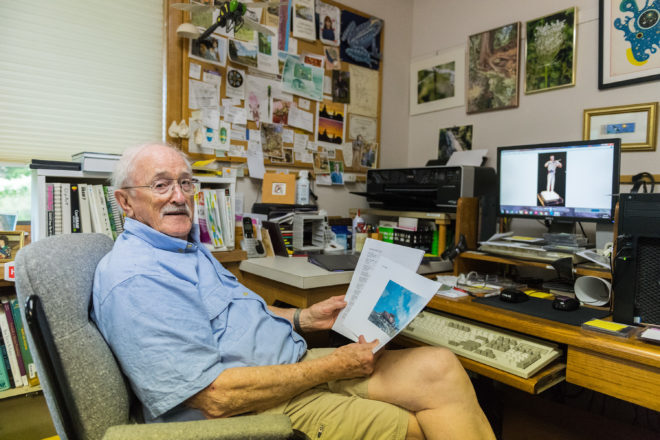 Paul Burton wasn’t born in Door County, nor did he have a home here until 1991. He still describes himself as “a hillbilly from Burnsville, North Carolina,” but there’s surely not a single other person who would choose that term in regard to this eminent scholar, scientist, historian and author.

All these factors contributed to a remarkable career and continue to serve him well in retirement. However, the characteristic that has most influenced Burton’s many contributions to life in Door County is that he is a giver.

“There are givers and takers in the world,” he said, “and since I had a choice, I wanted to be counted among the givers.”

Burton was introduced to northeast Wisconsin in 1959, when he married into a St. Louis family who spent summers here. Although he grew up and completed three degrees at universities in the southeast, his first teaching position was at St. Olaf College in Minnesota. Trips from there to Door County featured a landscape far removed from the Smoky Mountains.

“Later, when I became a professor at Kansas University (KU), our family made the drive from Lawrence to Ephraim every summer,” he said. “Since I was deeply involved in research at the university, I always hesitated to leave the lab to head north for a vacation. At first, I was persuaded to spend a week or so in Ephraim. Several weeks gradually morphed into a month or two, and gradually the community became part of my DNA.”

It should be noted that when Burton says he was “deeply involved in research,” he is being extremely modest. At KU, he spent 25 years teaching and carrying out biomedical research for the U.S. Public Health Service. Using an electron microscope to study the internal anatomy of nerve cells, he discovered that tiny tubules in the cells work like two-way railroad tracks, taking bubble-like material to long terminals in the brain and returning unused material to the cells. Diseases like Alzheimer’s can cause the nerve cells to lose their tubules, thus compromising communication between the cells and the brain.

During his career, he published 70 papers in peer-reviewed scientific journals, served as a professor of physiology and cell biology for 28 years and department chair for three. He spent a decade as senior scientist with the Mid-America Cancer Center Program and received the National Institutes of Health Career Development Award every year from 1967 to 1972. The Burton home on South Dane in Ephraim was built in 1991, when he retired as Professor Emeritus.

One might assume that a life of relaxing and enjoying the view of Eagle Harbor would be appealing after such a challenging career. And one would be wrong. Remember, Burton is a giver, with major interests in three areas — history, science and the arts.

“I was struck with the efforts of the Ephraim community to preserve the best of its present, while ensuring that, through thoughtful ordinance language, it might retain the character and values of its past,” he said.

Feeling he had some talents that might help the community prepare for future challenges, he served for 10 years on the village board, including six as president.

Burton recently worked with Thea Thompson, executive director and curator of the Ephraim Historical Foundation, to identify and photograph paintings in the Ephraim collection. Virginia Maher, an art historian, was also involved with this project, which will be published in book form. Burton is also working with Maher on a volume about local art and artists. And he’s writing another book with a local setting — People and Places in Door County.

“Paul has been a driving force for historic preservation in the village of Ephraim and Door County as a whole,” Thompson said. “For the past several decades, he has remained a dedicated supporter and student of Ephraim’s history. He served as president of the Ephraim Historical Foundation from 1989 to1991, created our lecture series, ‘History Speaks,’ which just completed its 27th season, and for many years conducted both walking tours and tram tours throughout the village. He has been a wonderful mentor and teacher for me.”

A longtime supporter of The Ridges Sanctuary, Burton lectures there on topics including global warming and its impact on the environment. “It happens so slowly that most people don’t know it’s occurring,” he said.

“As a biologist I was keenly aware of the importance of protecting diverse habitats that sustain rare bits of life, from the Hine’s emerald dragonfly to beds of dwarf lake irises,” Burton said. “In Door County we can be one with nature and feel the spirituality of living things and even the grandeur and spirituality of the Niagara Escarpment. Our children and grandchildren face unprecedented global challenges. I believe that each of us, in our own way, has the opportunity to prepare them to keep our planet green.”

Steve Leonard, executive director of the Ridges, said Burton’s work has made a substantial impact at the preserve.

“Paul does an annual dragonfly count, checking the entire property for not only the rare Hine’s emerald dragonfly, but all types, and he does a dragonfly workshop every summer,” Leonard said. “The fact that he combines science with research is especially valuable to us.”

“Beyond biology I was also interested in other aspects of life in the county, and we have supported collective efforts in music, art and theater, whose offerings elevate the human spirit,” Burton said.

In 2006, Burton and wife Fran founded Stonehill Publishing, and they have written seven books, including Ephraim Stories and Door County Stories and Stories from the Belgian Settlement. A special interest in the life of the young Moravian pastor who, in 1849, brought his Green Bay congregation to the wilderness of Door County led to the 1996 book, Ephraim’s Founding Father: The Story of the Rev. A. M. Iverson.

“I like to play with words, finding just the right ones to convey a point,” he said. “If I’m not working, I get depressed.”

Not likely to happen any time soon!