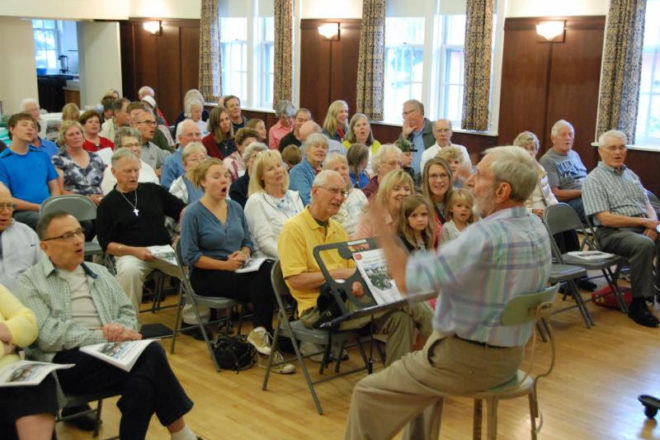 Music and laughter return to the Ephraim Village Hall for the 23rd season of Sunday SingAlongs. Revived in 1994 by Armella and George Norton and run with the help of dedicated volunteers such as Scott Weborg, who hasn’t missed a SingAlong in 23 seasons, the Nortons’ goal was to bring visitors of all ages together for an hour of song. Held on Sunday evenings in the summer, each SingAlong features a different theme and a different song leader, including longtime leader Don Makuen, who died unexpectedly May 15 at the age of 86.

Known for his booming voice and love of campfire songs, Makuen’s connection to the Sunday SingAlongs began with a chance encounter with the Nortons in a swimming pool. After he learned of the new Sunday SingAlong program, he offered his talents as a song leader. The final 2017 Sunday SingAlong on Aug. 6 will be a remembrance of Don Makuen. A 2014 video of his SingAlong, filmed by Trevor Chase, will be shown.

Sunday SingAlongs begin at 7:30 pm in the Ephraim Village Hall. This free program is held each Sunday. Cheri Boock leads “Americana” on June 18, “Folk Songs” on July 9, and “American Greats” on July 30. Dave Olson leads “Love Songs and Ballads” on June 25 and “Songs from Yesteryear” on July 23. Tom Murray leads “Summertime Fun” on July 2 and “Harmony” on July 16.