In a mythical land known as Rock Island, students from Washington Island and Sevastopol joined together in celebration of the Olde English tale Beowulf, recreating the anonymously-written epic in a period setting Sept. 21.

The epic poem tells the tale of the great warrior Beowulf and his battles with the monster Grendel, Grendel’s mother and a dragon. 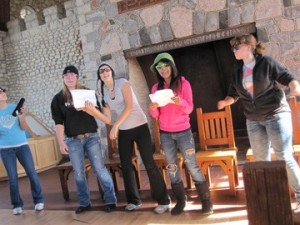 Sevastopol students (from left) Falon Augsburger, Christiana Gorchynsky, Maria Hernandez and Michelle Hansen perform a scene from Beowulf as a rap. The students were taking part in a joint study of Beowulf with Washington Island students.

Since the late 1980s, Washington Island English and history teacher Leila Nehlsen has taken her high school students to Rock Island when they read the poem. Although she isn’t exactly sure which year she started the every-other-year pilgrimage, Nehlsen said she made the trip at least five times before inviting Sevastopol students along in the fall of 1997.

The invitation came as the result of Nehlsen’s time teaching at Sevastopol and her relationship with former student and current English teacher Heather Fellner-Spetz.

“One summer Linda [Thompson], Heather [Fellner-Spetz] and I were having coffee when they had come to visit, and we started talking about it. Because Linda Thompson teaches the same piece, [the partnership] just kind of emerged,” Nehlsen said.

The Thordarson Boathouse makes Rock Island the perfect locale for the re-enactment. Built by inventor Chester Hjortur Thordarson in 1927, the boathouse was meant to resemble an Anglo-Saxon mead hall with its stone walls and mythical wood carvings.

A Washington Island native, Nehlsen returned to teach there in the late 1980s, and immediately connected the mead hall in Beowulf with the Rock Island boathouse.

As part of the unit on Beowulf, Nehlsen’s students write a ballad in honor of a grandparent or great-grandparent. They then perform the ballads in class since stories at the time Beowulf was written – between the 8th and 11th centuries – were passed down from generation to generation orally, Nehlsen said.

They also have to do an additional project, such as making authentic wooden swords similar to what the Geats in the poem would have used.

Upon arriving at the boathouse, Nehlsen sings a ballad to start the performances. Groups from each school choose a part of the poem to read aloud and perform. 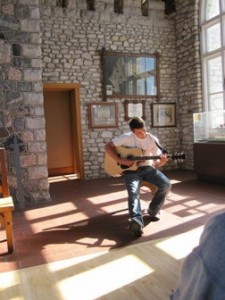 Trevor Hietpas plays guitar in the Thordarson Boathouse on Rock Island Sept. 21. Hietpas was taking part in a joint performance of Beowulf with Sevastopol and Washington Island students.

Nehlsen said the Sevastopol students amazed her this year. One group acted out the poem with sock puppets while another group created a rap. Some of Nehlsen’s students danced, creating a battle between good and evil that Thompson called beautiful.

The performances take an hour, leaving students from the two schools with time to socialize, eat lunch, play football and hike together.

Both teachers said the trip provides students with a learning experience outside the classroom and makes school a little more exciting.

“The story is still contemporary after thousands of years, and learning so often in high school is boring,” Nehlsen said. “Half the time [the students are] all ho hum; one of my goals always has been making high school somewhat fun.”

For students who grow up on the mainland, Thompson said she sees the adventure as a way for her students to learn more about Washington Island and the people who live there.

“I really hope someday they go back with their kids and appreciate what Door County has to offer,” Thompson said.

Sevastopol senior Brandon Cote said seeing the performances was the best part of the trip, and he felt the purpose of the trip was to do just what Thompson and Nehlsen hoped: “To mingle with other kids, expand our knowledge on Beowulf and explore Rock Island.”