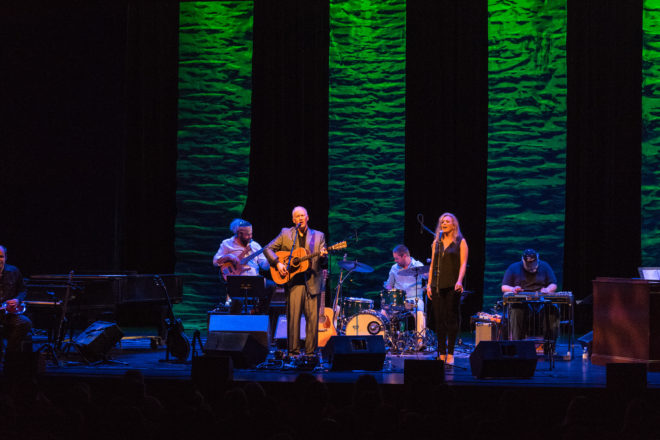 Eric Lewis has a penchant for doing things with friends.

On June 15, Lewis held a CD release concert at the Door Community Auditorium in Fish Creek for his newest album, Before the Last Time, an ode to the traditions spanning country, rock, folk and bluegrass.

Lewis, known for his trips up to Door County with some of the best musicians from the Memphis and Nashville music scene, has consistently delivered tours de force of Tennessee talent and music, all spurred by Lewis’ love for making music with others.

The express purpose of Before the Last Time, for Lewis, was to collaborate.

“For years I have been hoping to record with some of my favorite musicians,” Lewis writes of his album, “and it seems that as time passes, I inevitably get an unexpected phone call that another one of my friends has passed away. I finally decided that I wasn’t going to wait any longer.”

Lewis’ compositional contributions to the album echo this sentiment. “Western Wind” was inspired by the death of Lewis’ friend Lance Strode, “an extraordinary country singer/songwriter that I was lucky enough to record a handful of songs and play many gigs [with].”

“And sail away in the western wind.

I don’t believe this is the end

I’ll see you in heaven but it feels like hell.”

In his other offering, “Found a Home,” loss is felt at a distance with the death of a friend’s father. With spectacular harmonica playing by Rory Hoffman, “Found a Home” touches on the reverberations of an unexpected loss, of how the whole process moves too quickly. The refrain paints loss in the context of what must be, of inevitability, but with comfort and freedom close by:

“The color of the trees are calling

For all the birds to fly back home

And just because the leaves are falling

This isn’t just an album about grief. The musicians who join Lewis on Before the Last Time – and they are legion, and very accomplished in their own endeavors as well – help portray a wider message of the value of companionship, of the many dimensions of friendship, and of the joy of music. The album ends with an updated version of a classic, “Freeborn Man 2016:” down-tempo and electric until they play through for a second time, moving from slower than Keith Allison’s 1967 original to nearly Tony Rice speed with breakneck picking solos.

This camaraderie in music has been seen before, and it crosses the boundaries of genre. Lewis and his drive to perform with “some of the best pickers on the planet” echoes the role of bandleader played by Miles Davis in his quintet, in which Davis took under his wing those who would later become giants, such as John Coltrane, Wayne Shorter, Herbie Hancock, and even John McLaughlin.

Lewis and friends had nothing to prove with this album, for all the collaboration of skilled musicians on it. Boundaries weren’t pushed, and there isn’t an undercurrent of virtuosity in the selection of the songs, of which only two are originals.

Rather, this is an album made for those who played on it, and was shared with us as a token of generosity. It is a cataloguing of a coming together, a homecoming, for these performers and entertainers out of Memphis who have come to experience their closest human relationships through the sharing of music. It is an affirmation of why they were drawn to music in the first place, and of why music ought to be cherished by the rest of us as well.