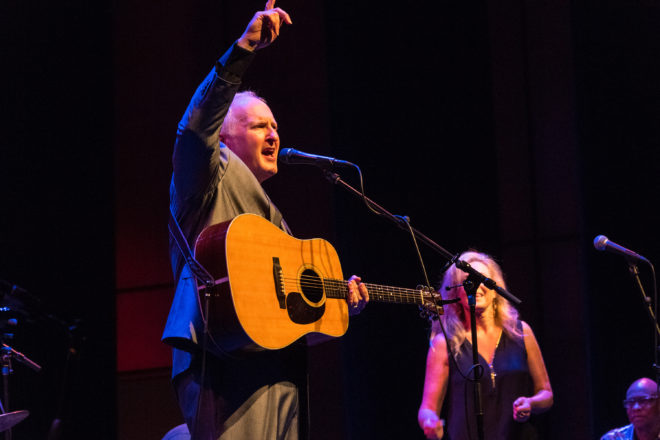 Camp David has been a memorable music venue to many artists. But, perhaps it’s most special to Eric Lewis, who’s celebrating his 20th year of being on the Fishstock stage. He was there from the beginning, and the Pulse talked with him over breakfast about his musical journey.

Lewis is originally from Clinton, Tennessee, but currently resides in Memphis. He comes from a musical family – his grandfather played the banjo and his mom played guitar and wrote her own songs.

One day when he was a kid, they were visiting his grandfather in the nursing home and people were playing bluegrass music. An orderly came in and asked to play somebody’s guitar. Lewis was blown away by his skills, and that’s when he knew he wanted to learn the guitar.

Now he’s a full-time musician that’s often on the road. He’s available for session work, to play instruments on other artist’s albums, and even has albums on his own.

Though Door County folks might think of him as a bluegrass musician, Lewis is really interested in all sorts of music. He has a “diverse tapestry” of interests and skills. In high school, a couple of his friends from marching band even started a rock band, playing music from the likes of Judas Priest and Mötley Crüe.

He’s also branched out from playing only guitar. He plays steel guitar as well. It’s like a dobro, but is placed on a table in front of the musician, like they would play a piano. His range of instruments include anything from bass to mandolin, too. Still, perhaps he’s most recognizable as a “flat-picking extraordinaire,” as said by an old Pulse article.

Lewis first came to Door County in 1997 when he got hired at American Folklore Theater (AFT), now known as Northern Sky Theater. While there, he did a few shows with Fred Alley and Doc Heide, two of the founding members of AFT. He stayed there for a few summers, and even played some fall and Christmas shows.

Eventually, Dave Ellmann, owner of Camp David and recently retired organizer of the Fishstock series (now under the care of his brother, Steve), asked Lewis to play at the concert barn on Camp David’s property, and the experience was magical. He kept getting invited back to play, and eventually 20 years went by.

“You never know what’s going to happen when you set foot on stage; it’s just always different,” Lewis said. “It’s just magic, being in an old dairy barn out in the country playing music with a lot of people that are really enjoying it.”

In any case, Lewis has kept coming back to the peninsula for the music, whether at Camp David or elsewhere in Door County. He’s made lots of musician friends here, and often performs with them as Eric Lewis & Friends. He considers himself lucky to have had those opportunities, he said.

Overall, it’s been mindblowing for him to look back on the past 20 years and to remember the opportunities to experiment, grow and work with others. It’s also been crazy to look back to the very beginning too – when he first started playing guitar as a 13-year-old boy to moving to Memphis at 18 to join a band and to having his own albums. And Camp David stands out amongst it all.

“It’s just a special place. It’s not like any other place I’ve ever played,” Lewis said.

Eric Lewis & Friends perform at Fishstock Sept. 2, 7 pm. Reserved tickets are $20 and can be purchased at fishstockmusic.com. General admission tickets are $15 at the door.