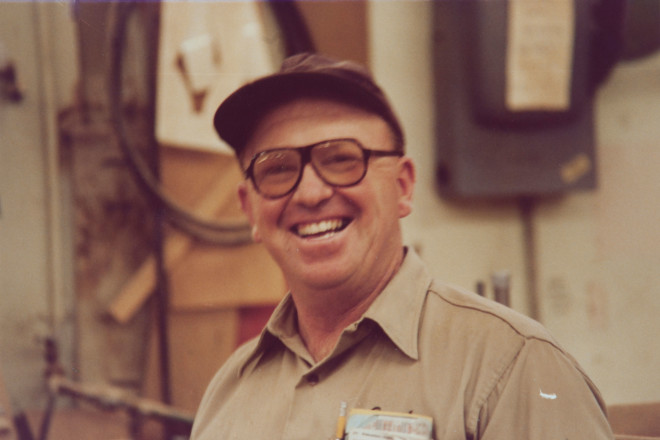 Down on Shiloh Road, a few miles outside the city of Sturgeon Bay, there sits an old barn. Non-descript and a bit worse for wear, it’s built snug into a slope behind an old farmhouse, and nothing of its exterior hints that inside is the home workshop of one of the finest carpenters Door County has known.

For most of the last half-century, Norman “Rusty” Lardinois has piled sawdust on this floor, churning out grandfather clocks, cabinetry, and gun stocks custom-made for the shooting style of the men who would use them. But all this he did on the side, for his claim to fame came from his work inside the cramped, unforgiving confines of the fine sailboats and yachts of Palmer Johnson. 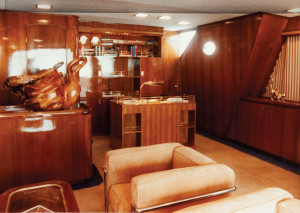 Mike Kelsey Jr., President of Palmer Johnson, grew up at his father’s side at the yard, watching Lardinois ply his trade in the carpentry shop. He says Lardinois’s work played an integral role in building the reputation that the Palmer Johnson brand earned producing some of the finest boats in the world.

“Rusty Lardinois was one of the best carpenters, not just at Palmer Johnson,” Kelsey says, “but in the marine trade period. There aren’t many people like him left in the world. He was like a savant when it came to wood.”

When Lardinois began, Palmer Johnson was “just a skimpy little yard,” and over a period of 35 years, until his retirement in 1992, Lardinois was the lead carpenter who created the detailed interior woodwork that helped make a Palmer Johnson yacht a symbol of wealth and prestige. Now 84, he leans back on an old stool in his shop, hands stuffed into the pockets of his weathered jacket, perched above piles of sawdust amidst the table saws and hundreds of tools lining its walls, and talks about the demanding standards that came with building boats for big-money clients. As carpentry foreman, Lardinois would have several meetings with a client before work began, making sure he was clear about what they were looking for.

“They wanted you to know what they expected,” he says. Some of the clients were impossible to please, but most were enjoyable to work with. “The majority of them, they trusted you. And they should, we had a good yard,” he says with a subtle nod of the chin to emphasize the point and show his pride. He doesn’t say “I” very often, but speaks of himself in terms of “the yard” and his carpentry crew. 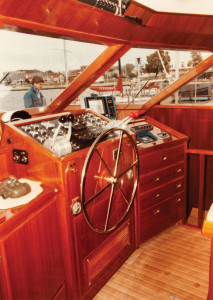 Lardinois appreciated the fact that his bosses put a premium on quality over speed. They would build one, maybe two, boats in a year. “You could put the time into it to get it right,” he says, and he did. Kelsey says Lardinois was known for being finicky about the wood he would use and knew it like nobody else.

“He could discern between types of wood within a genre and would always find the absolute perfect piece of wood for a project,” Kelsey says. “He looked at every angle of the grain, looked for patterns in the wood he could use. It was an art to him. Rusty’s work had to be perfect.”

Kelsey described the pressure that was on Lardinois and his team of carpenters to get things just right. “Homes, not to knock them, but few are built to the same level of carpentry that you see on a fine yacht. The owners of a yacht are spending a lot more money, for much less square footage, and they see every detail.”

Lardinois relished the role. “The fancier the project, the more I liked it. We always used the best wood you could find, usually had it shipped in – teak, black walnut,” he recalls. “Those buyers want the best of everything, so you bet it’s rewarding to make them happy.”

One buyer Lardinois impressed immensely was Chicago railroad executive Ben Heineman, who owned a home in Ephraim and bought two boats from Palmer Johnson. He made frequent trips to the yard to check on the progress of his boats, the Falcon and Falcon II.

“Ben Heineman was a really nice fella, I liked working with him,” Lardinois says. “He knew what he wanted.” 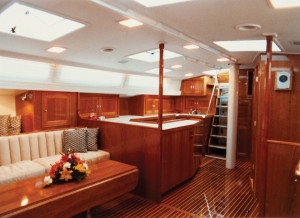 thanks, as well as a bonus check for $1,000 in appreciation for his interior woodwork on the yacht. Heineman called it the most beautiful on a boat since World War II. “I want to thank you very much for the immense contribution that you made to the beauty of Falcon II,” Heineman wrote. “I can’t thank you enough.”

“Heineman liked things done right,” Kelsey says, “and he really liked Rusty because he knew Rusty would get it right.”

Kelsey recalled the day the owner of their number one competitor, a builder from the Netherlands, visited their yard and saw some of Lardinois’s woodwork.

“That’s the best joiner work I’ve ever seen in my life,” Kelsey said the owner blurted out.

Much of Lardinois’s best work came in the cramped spaces of a sailboat, where “you had to make the most out of absolutely every inch on the boat.” It’s tough, painstaking work that requires an attention to detail few people possess.

Bob Brandriff, a carpenter who worked stretches at Palmer Johnson and Peterson Builders on and off from 1960 to 1980, said it took a special patience to do Lardinois’s work, and a lot of really good carpenters couldn’t pull it off. 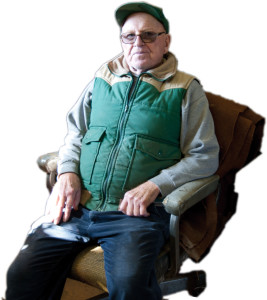 “A lot of guys who were used to framing houses wouldn’t do it,” Brandriff says. “They were used to working fast and would get frustrated because it just took so long. Everything was custom, you work in cramped spaces, and there are no straight lines on a boat like when you’re framing a house.”

But if you could adjust to the pace and pressure of producing for the likes of Ted Turner and the King of Spain, it was a special opportunity to work with the finest materials. It was work the Lardinois family was practically genetically attracted to.

“The Lardinois family is known as masters of woodwork,” Kelsey says, “with Rusty the maestro. He could look at the banister of a stairwell and tell you what kind of wood it was made of, how old it was. He could read wood just like a book. It talked to him.”

When Rusty retired, it was only after his son Dale (known by his nickname, Oscar) had learned at his side for nearly two decades, absorbing the wisdom Rusty began to gather as a kid at his father’s side.

And Oscar would continue to build the family reputation until his sudden death on New Year’s Day, 2010, at age 55.

“Oscar was unbelievably talented in his own right,” Kelsey says. “His death was a tragic loss for us, and there’s not a day that goes by that we don’t miss him.”

The father and son personify what Brandriff is getting at when he says, “Even a big boat’s small.” It’s a

nod to the fact that the massive cargo ships at Bay Ship and the mega-yachts at Palmer Johnson all begin with small jobs. A welder, a carpenter, a machinist, a fitter. Jobs filled by the proud workers whose work goes unheralded but whose skills form the foundation of some of the finest ships in the world.

Outside the executive offices and far removed from the seas where the yachts of Palmer Johnson draw jealous eyes, beneath the enormity of an industry, are the toiling individual tradesmen who, one by one, play their part in building the reputation of a company, an industry, and a city behind the walls of the Sturgeon Bay shipyards.

He was never an executive, but Rusty Lardinois’s value to the company was not unnoticed in the yard. “He was a really big part of Palmer Johnson’s success,” Brandriff says. Kelsey goes a step further. “Without men like him, our company wouldn’t exist.”